A new 6.8-magnitude earthquake has struck Pakistani province Balochistan, where at least 400 people died in a quake earlier this week.

An official told Pakistan television that communications already damaged by last Tuesday’s quake had been cut off.

Efforts to help thousands left homeless by the first earthquake have struggled against poor roads and separatists.

The US Geological Survey said Saturday’s tremor measured 6.8-magnitude and could be felt across Balochistan province.

Pakistan’s Meteorological Department classed it as an aftershock measuring 7.2 magnitude.

Abdul Rasheed Baloch, the deputy commissioner of Awaran district, told Pakistani television that one village, Nokjo, had suffered damage to most of its buildings, leaving people trapped under debris. 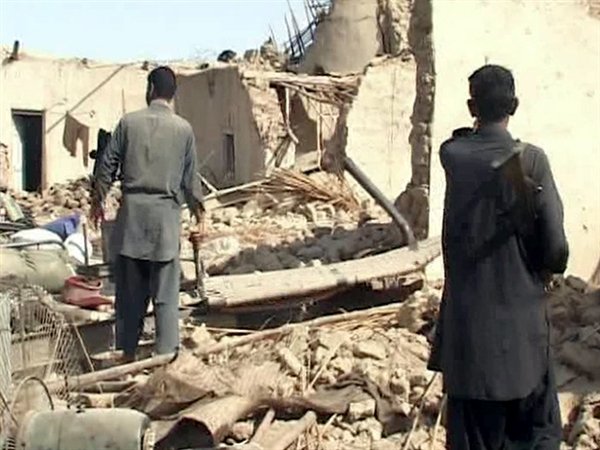 A new 6.8-magnitude earthquake has struck Pakistani province Balochistan, where at least 400 people died in a quake earlier this week

“The telephone system has been damaged and we are not able to talk to someone and find out the exact information about the losses… but we have reports of severe losses in that area,” he said, according to Associated Press.

Eight of those who died in Saturday’s tremor were from Nokjo, officials said, with another four killed in the Mashkay area.

An AFP reporter in Awaran said hundreds of patients being treated after the last quake fled a hospital in panic as the latest tremor struck.

Saturday’s quake was felt as far away as Karachi.

An office worker there described his chair shaking: “At first I thought it was a delusion or a false feeling. But all my colleagues ran out of the office. The shakes were heavy.”

Officials have estimated that about 300,000 people were affected by the earlier, 7.7-magnitude quake which leveled mud and homemade brick homes, injuring hundreds.

Many survivors have been sleeping in the open air or in tents.

Rescue and relief efforts after the earlier quake have been hampered by the region’s poor road network.

Officials have appealed to separatist military groups operating in the area following attacks on army units involved in providing assistance.

It already had thousands of soldiers deployed in the area because it is fighting a long-running separatist insurgency by Baloch nationalist rebels.

The violent force of Tuesday’s 7.7-magnitude quake caused the creation of a new 56ft long island off the coast of Pakistan near the port of Gwadar.