Kanye West got angry after Jimmy Kimmel Live‘s recent parody of the lengthy, in-depth interview the rapper gave to BBC’s Radio One, in which he referred to himself as the “No. 1 rock star on the planet” and delved into various personal topics.

Kanye West, 36, took to Twitter to slam Jimmy Kimmel’s action: “JMMY KIMMEL IS OUT OF LINE TO TRY  AND SPOOF IN ANY WAY THE FIRST PIECE OF HONEST MEDIA IN YEARS.”

“JIMMY KIMMEL, I DON’T TAKE IT AS A JOKE… YOU DON’T HAVE SCUM BAGS HOPPING OVER FENCES TRYING TO TAKE PICTURES OF YOUR DAUGHTER,” the rapper continued.

“YOU CAN’T PUT YOURSELF IN MY SHOES. YOUR FACE LOOKS CRAZY…IS THAT FUNNY?…OR IF I HAD A KID SAY IT WOULD BE FUNNY???”

The spoof that angered Kanye West featured a little boy reciting actual snippets of the artist’s interview while fiercely sipping a milk shake in between sound bites.

“I brought the leather jogging pants six years ago to Fendi, and they said <<no>>!” little Kanye exclaimed in the “Kanye Kid Re(Kreation)” 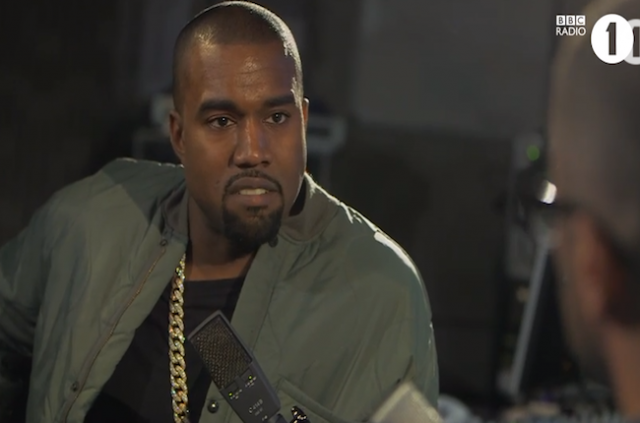 Kanye West got angry after Jimmy Kimmel Live’s recent parody of the lengthy, in-depth interview the rapper gave to BBC’s Radio One

Kanye West went on: “SHOULD I DO A SPOOF ABOUT YOUR FACE OR YOU F***ING BEN AFFLECK…#NODISRESPECTTOBENAFFLECK #ALLDISRESPECTTOJIMMYKIMMEL!!!!”

Instead, Jimmy Kimmel appeared to fully enjoy reaping what he had sowed.

“apparently @KanyeWest is VERY VERY ANGRY with me….” Jimmy Kimmel tweeted when he first got wind of Kanye West’s rant.

“if it’s not too much trouble @kanyewest, would you mind using @jimmykimmel? Thanks”

Kanye West continued: “I LIKE YOU, YOU KNOW ME, I WENT TO YOUR FAMILY’S WEDDING.”

Jimmy Kimmel replied: “I like you too! Glad we cleared this up.”

But Kanye West didn’t stop: “WHO YOU MADE IT CLEAR TO ME WASN’T YOUR FAMILY WHEN I WAS ON THEN PHONE WITH YOU 5 MINUTES AGO, YOU MANIPULATIVE MEDIA MUTHERF***ER.”

Jimmy Kimmel then swatted back with: “I know! #WreckItRalph, right?!” when Kanye West jabbed at him with: “SARAH SILVERMAN IS A THOUSAND TIMES FUNNIER THAN YOU AND THE WHOLE WORLD KNOWS IT!!!”

Then Kanye West started tweeting pictures, one of which Jimmy Kimmel duly retweeted.

“I swear, @kanyewest one more of these I WILL unfollow you #warning #Goshdarnit,” Jimmy Kimmel wrote.