Iran has been urged by China and the US to respond “positively” to an international offer over its nuclear programme, US officials say.

The call came ahead a rare, high-level meeting between the US and Iran.

Iranian President Hassan Rouhani called for a world without nuclear weapons, hours after saying Tehran wanted a deal in three to six months.

The West suspects Tehran is trying to develop a nuclear weapon, a claim strongly denied by Iran.

Iran has been negotiating over the issue since 2006 with the P5+1 – the five permanent members of the UN Security Council, plus Germany.

On Tuesday, Hassan Rouhani told the UN General Assembly that he was prepared to engage in “time-bound and results-oriented” talks.

On Thursday, Hassan Rouhani called from stricter controls on nuclear weapons as part of a global effort to eventually rid the world of them.

“No nation should possess nuclear weapons; since there are no right hands for these wrong weapons,” he said, speaking on behalf of the Non-Aligned Movement at the General Assembly. 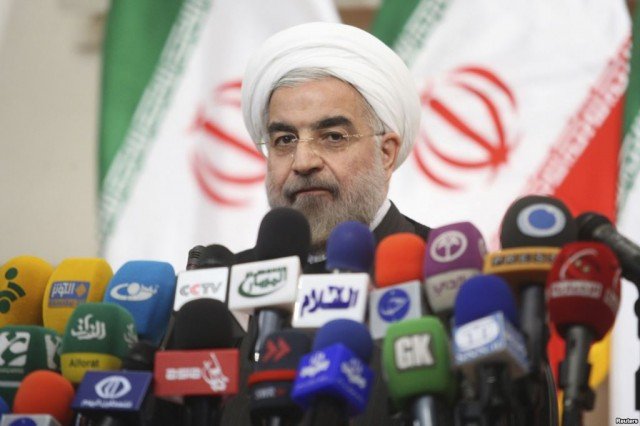 The P5+1 has asked to halt production and stockpiling of uranium enriched to 20% – a step away from achieving a nuclear weapons capability.

In return, it offered to ease the sanctions that have severely affected Iran’s economy.

“Both the US and China believe that Iran should cooperate with the P5+1 and should respond positively to the proposals that are on the table,” a US official told journalists at the UN.

Later, Foreign Minister Mohammad Javad Zarif is due to meet US Secretary of State John Kerry as well as diplomats from the UK, France, Russia, China and Germany on the sidelines of the annual UN General Assembly summit in New York.

It will be the highest level direct contact between the US and Iran for six years.

Barack Obama told the UN on Tuesday that the US wanted to resolve the nuclear issue peacefully, but was determined to prevent Iran from developing a nuclear weapon.

Hassan Rouhani has said he is fully empowered by Iran’s Supreme Leader Ayatollah Khamenei to negotiate on the issue.