A video footage of Washington DC Navy Yard gunman Aaron Alexis prowling the corridors of the complex as he hunts for victims has been released by the FBI.

During a press conference, an FBI spokeswoman said Aaron Alexis, 34, believed he was being controlled by extremely low frequency radio waves.

Aaron Alexis killed 12 people in the rampage on September 16 before he was shot by police in a running gun battle.

Officials say they believe he did not target any specific individuals.

Later clips show him stalking a corridor armed with a shotgun and checking if a room is empty, before running down a flight of stairs.

The agency also released images of a weapon Aaron Alexis used during the shooting.

He had written “my ELF weapon” – apparently referring to extremely low frequency waves – and “Better off this way!” on a Remington 870 shotgun. 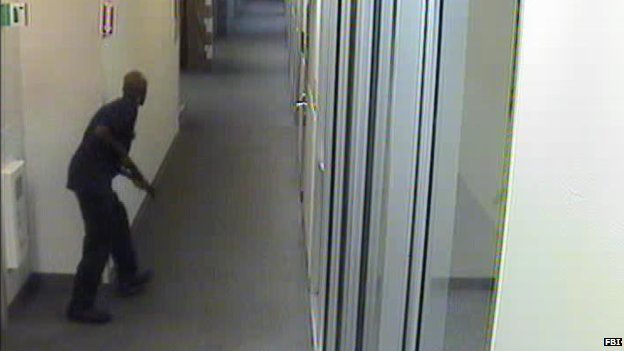 A photo of his backpack, which he used to bring the weapon into the building and then left in a men’s toilet, was also published by the FBI.

Valerie Parlave, head of the FBI’s field office in Washington, said in Wednesday’s news conference that they were still investigating Aaron Alexis’ background and motivations.

But she noted the former Navy reservist had a well-documented history of mental health issues.

Valerie Parlave said: “At this point I can confirm that there are multiple indicators that Alexis held a delusional belief that he was being controlled or influenced by extremely low frequency, or ELF, electromagnetic waves.

“The etching… is believed to reference these electromagnetic waves.

“In addition, a document retrieved from the electronic media stated <<ELF attack is what I’ve been subject to for the last three months, and to be perfectly honest that is what has driven me to this>>.”

“However, conspiracy theories exist which misinterpret its application as the weaponisation of remote neural frequencies for government monitoring and manipulation of unsuspecting citizens.”

As an IT subcontractor, Aaron Alexis had an entry pass to the Navy Yard complex.

Investigators say he acted alone and died on the third floor of Naval Sea Systems Command headquarters after about an hour of exchanging gunfire with officials.

The shooting has led to questions about how Aaron Alexis received the security clearance necessary to be a contractor and enter the installation and prompted calls to review the government vetting process.

Also on Wednesday, Washington Police Chief Cathy Lanier told local media a Washington DC police officer was shot in the chest while responding the shootings but was saved by protective gear.

Another police officer was shot in the leg and is currently recovering in hospital.