Pakistan earthquake death toll raised to 328 while hundreds more are wounded in south-west province of Balochistan.

After the quake, an island appeared off the coast near the port of Gwadar.

People gathered on the beach to see the new island, which is reported to be about 656ft long, 300 ft wide and 60ft high, and scientists have been sent to survey it.

Officials say such land masses have appeared before in the area, and usually disappear again over time. 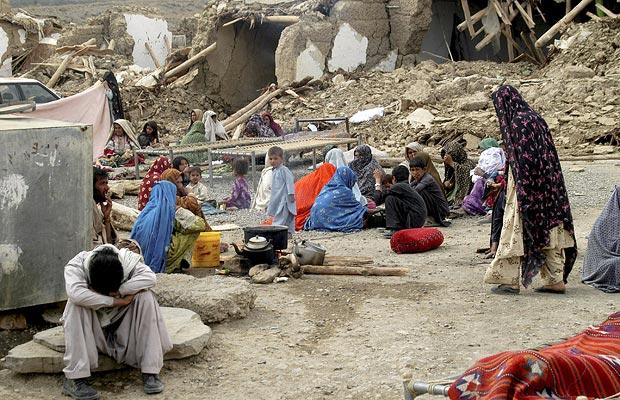 Tuesday’s quake was so powerful it was felt as far away as India’s capital, Delhi, and Dubai. Workers in Karachi had to evacuate their offices because of the strong tremors.

The military has a heavy presence in the area because it is fighting a long-running separatist Baloch insurgency, and so its troops were among the first to respond to the crisis.

It is feared the death toll could rise once other areas are reached. The number of wounded is reportedly more than 440.

Awaran local government official Abdul Rasheed Baluch said about 90% of houses in the district had been destroyed.

Some 250 houses collapsed in the village of Dalbedi and villagers were clawing through debris for possessions, an AFP photographer at the scene said.

The army says it has sent more than 200 soldiers, medical teams and tents from the regional capital Quetta.

But the mountainous terrain and loss of communications is hampering the rescue operation.

Helicopters have been airlifting the most seriously injured to Karachi, while others are being cared for in neighboring districts.

The affected area is vast, impoverished and sparsely-populated. Awaran district reportedly has around 300,000 residents.

Most people live in easily-collapsible mud homes, and many are feared to be trapped under the rubble.