The Muppet Show, Sesame Street and Fraggle Rock’s puppets have been donated to the Museum of American History in Washington.

Miss Piggy has now joined her on-screen paramour Kermit the Frog and other 19 puppets created by Jim Henson in the Smithsonian Institution’s collection.

The event took place on what would have been Jim Henson’s 77th birthday.

Jim Henson died in 1990, while his wife and collaborator Jane died in April this year.

Their daughter Cheryl, who is president of the Jim Henson Foundation, said she was “so happy to have [her] father’s work be part of the cultural heritage of this country”.

“When you look at these different characters, you can hear their voices,” she said. 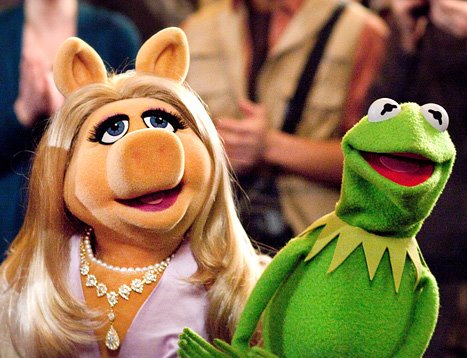 The fame-seeking Miss Piggy will be on view within the museum’s American Stories exhibition, which starts in March 2014.

Several other Muppets and Sesame Street characters will be part of a broader puppetry display that will open this November.

“The Muppets are very much a touchstone to my childhood,” said museum director John Gray.

John Gray called comedy and variety programme The Muppet Show, which ran from 1976 to 1981, “the best example of American vaudeville”.

Many of the puppets show the characters as they were first constructed.

These include Rowlf, a scruffy brown dog created for a dog food commercial in the early 1960s who later joined The Muppet Show as a pianist.

“He was Jim on the weekend, Jim in a hammock.”

The Museum of American History is already home to Oscar the Grouch, Kermit and the cast of Jim Henson’s early TV show Sam and Friends.