Five attackers were shot dead by troops and 11 suspects were in custody, he said in a TV address to the nation.

Kenya has “shamed and defeated our attackers” but the “losses are immense”, Uhuru Kenyatta said, confirming that 61 civilians and six soldiers had died.

Three days of national mourning have been declared, starting on Wednesday.

Uhuru Kenyatta said that several bodies – including those of “terrorists” – were thought to be trapped under rubble after three floors of the building collapsed following a blaze on Monday.

Some 175 people were injured in the attack; 62 people remain in hospital and many others are being treated for shock and are undergoing counseling. 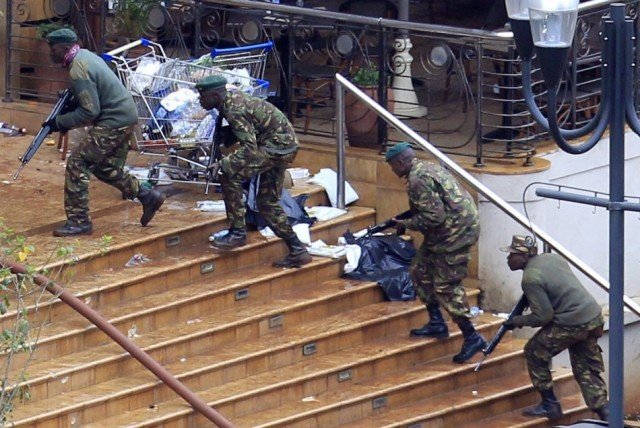 “I promise that we shall have a full accountability for the mindless destruction, deaths, pain, loss and suffering we have all undergone as a national family.

“These cowards will meet justice, as will their accomplices and patrons, wherever they are,” he said.

At least 18 foreigners are among the dead, citizens from France, UK, Canada, the Netherlands, Australia, Peru, India, Ghana, South Africa and China.

The militants stormed the Westgate centre on Saturday, throwing grenades and firing on shoppers and staff.

Uhuru Kenyatta said he could not confirm reports that a British national and two or three US citizens were involved in the attacks, but he said forensic experts were carrying out tests to ascertain their nationalities.

In an interview with the US TV programme PBS Newshour, Kenya’s Foreign Minister Amina Mohamed said the Americans were 18 or 19 years old, of Somali or Arab origin.

Her remarks have fuelled media speculation about the possible involvement of Samantha Lewthwaite, the widow of one of the men who carried out attacks on London’s transport system on July 7th, 2005.

However, a Twitter post from al-Shabab on Tuesday evening dismissed claims that women were involved in the attack. The group said it “categorically” denied involvement of any woman”.