At least 25 people died after Typhoon Usagi has hit Guangdong province of south China, the government has said.

Winds of up to 110 mph were recorded in some areas, toppling trees and blowing cars off roads. Its victims drowned or were hit by debris.

Typhoon Usagi has affected 3.5 million people on the Chinese mainland.

However, Hong Kong has escaped the worst of the storm.

Weather officials say that the ferocity of the storm has abated as it progressed into southern China, but financial markets in Hong Kong were closed for part of Monday morning.

More than 80,000 people were moved to safety in Fujian province and the authorities have deployed at least 50,000 relief workers, the state-run Xinhua news agency reported. Power supplies in many parts of the province and in Guangdong have been cut off. 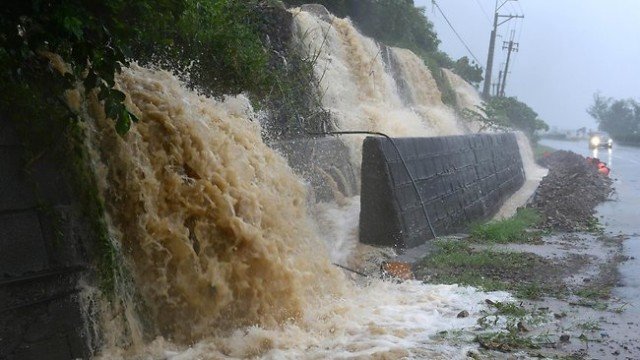 “It is the strongest typhoon I have ever encountered,” Xinhua quoted Luo Hailing, a petrol station attendant in Shanwei – in the eastern part of Guangdong province – as saying.

“[It was] so terrible, lucky we made preparations.”

Hong Kong’s port – one of the world’s busiest – shut down as the densely populated territory braced itself for the storm – the most powerful of this year.

Although officials say that Hong Kong escaped the worst ravages of the weather, the South China Morning Post said that Usagi still caused disruption and disarray, bringing flooding to some areas.

On Sunday evening the Post reported that Usagi’s designation had been reduced from Severe Typhoon to Typhoon and it was moving away from Hong Kong.

On Monday, classes were suspended in Hong Kong, Macau and 14 cities in Guangdong province, Xinhua reported.

Typhoon Usagi – which means rabbit in Japanese – had produced winds of 103 mph as it closed in on China’s densely populated Pearl River Delta.

China’s National Meteorological Centre warned that Typhoon Usagi would bring gales and downpours to parts of the southern coast.

People living in southern China are used to typhoons, but Usagi hit the region with unusual force.

The storm hit just as millions were travelling for China’s mid-Autumn festival – a national, three day holiday when many visit family – leading to flight and high speed train cancellations.

The storm killed two people on Friday as it crossed the Luzon Strait between Taiwan and the Philippines.

Parts of the Philippines were badly hit by floods caused by the typhoon on Monday.

“The rain is pounding and the water keeps on rising,” he said.