Kenyan Special Forces were today locked in a fight to the death with Islamic terrorists who have been barricaded inside Nairobi’s Westgate Shopping Centre with up to 40 hostages since Saturday.

Witnesses described hearing four large explosions at the Westgate Shopping Centre followed by the sight of thick plumes of smoke and the sounds of fierce gunfire after the military tried to break the three day siege by gaining access from the roof.

It is feared that some of the gunmen, who are from al-Qaeda affiliated group al- Shabaab, may have blown themselves up, though a Kenyan government minister said that militants had set fire to some mattresses in a supermarket as a decoy.

Interior Minister Joseph Ole Lenku said that three of the terrorists have now been killed and that most hostages were now free.

“We think the operation will come to an end soon,” he said.

“We are in control of all the floors, the terrorists are running and hiding in some stores… there is no room for escape.” 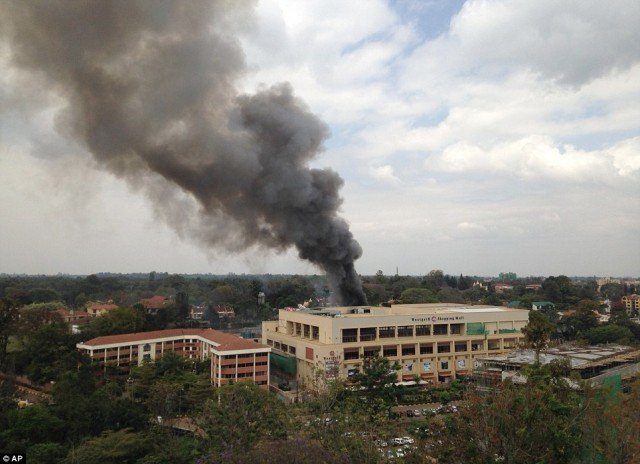 The Red Cross has put the death toll at 62 and says 63 are still missing. At least 175 were injured, including children.

The Kenyan interior ministry said “almost all” the hostages have been evacuated from the mall hours after it was rocked by a series of blasts.

In a Twitter message it added “some individuals” have been arrested at Nairobi airport.

In a series of updates, it said 16 Kenyan soldiers had been injured, adding that the focus of the operation is now clearing the building.

Interior Minister Joseph Ole Lenku said security forces now have control over all four storeys of the shopping mall and are confident there is no escape route for the surviving terrorists.

He said: “We are doing anything reasonably possible, cautiously though, to bring this process to an end.

“The terrorists could be running and hiding in some stores, but all floors now are under our control.”

As Kenyan soldiers and more armored personnel carriers descended on the mall, a spokesman for terror group al-Shabaab Ali Mohamud Rage said in a statement posted on an Islamist website that those held inside will “bear the brunt of any force” used by soldiers against the militants.

The statement read: “We authorize the mujahedeen inside the building to take actions against the prisoners as much as they are pressed.

“We are telling Christians advancing onto the mujahedeen to have mercy for their prisoners who will bear the brunt of any force directed against the mujahedeen.”

Meanwhile, a Twitter account claiming to represent al-Shabaab yesterday claimed that terrorists from seven nations are involved in the attack, including the U.S., Britain and Canada.