Michael Douglas, winner of the trophy for best actor in a miniseries or movie for playing Liberace in HBO’s Behind The Candelabra, closed his speech with a reference to his son Cameron who is serving a lengthy prison term for various drug crimes.

The actor said he hoped “they allow me to see him soon”.

It came in a no-holds-barred speech, which saw Michael Douglas cover everything from smutty jokes to thanking his wife Catherine Zeta-Jones for “her support”, despite their separation.

Backstage, Michael Douglas explained it will be another year before he can visit 34 year-old Cameron.

“I’m questioning the system,” he said. 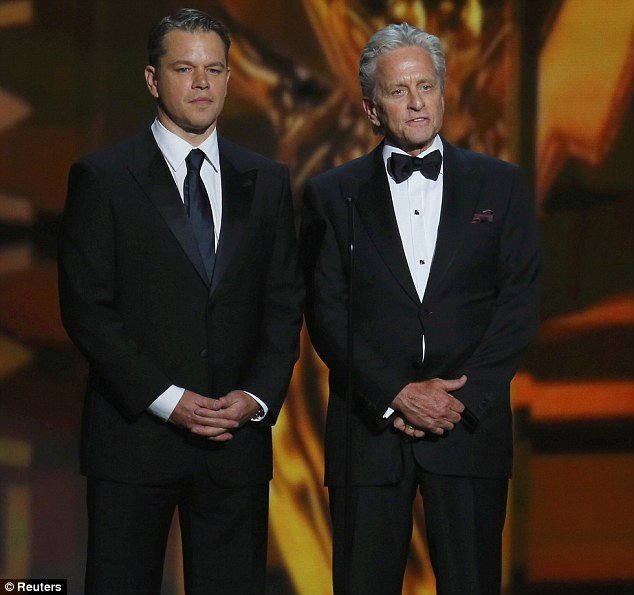 Cameron Douglas was convicted in 2010 of selling methamphetamine.

A judge nearly doubled his sentence after he was found guilty of repeatedly breaking prison rules by arranging to get drugs.

Cameron Douglas is scheduled for release in 2018.

“If you happen to have a slip, they punish you,” Michael Douglas said.

“In my son’s case, he has spent almost two years in solitary confinement.”

From the stage, Michael Douglas also thanked his wife, Catherine Zeta-Jones “for your support”.

That was an attention-getter following the announcement last month that the couple was taking “some time apart to evaluate and work on their marriage”.

Catherine Zeta-Jones did not accompany her husband to the Emmys. She was in China this weekend.

“This is a two-hander, and Matt, you’re only as good as your other hand,” he jokes, referring to co-star Matt Damon, who was also nominated for the gong.

“So I can say you were magnificent. You really deserve half of this.

“You want the bottom or the top. The top? I figure that.”

Michael Douglas and co-star Matt Damon also took to the stage during the awards show where they paid tribute to Liberace and introduced a performance by Sir Elton John.