Chinese politician Bo Xilai has been found guilty of bribery, embezzlement and abuse of power and sentenced to life imprisonment having the right to appeal.

Bo Xilai had denied all the charges against him in a fiery defense at his trial.

The former party chief of Chongqing was removed from office last year amid a scandal which saw his wife Gu Kailai convicted for the murder of British businessman Neil Heywood.

The verdict was handed down by the Intermediate People’s Court in Jinan, Shandong province.

Passing sentence the judge told Bo Xilai that he had damaged China’s national interests and the interests of its people, wrongfully using his position in power to receive bribes totalling 20 million Chinese Yuan ($3.2 million).

The judge rejected Bo Xilai’s claims that his confession to the crimes was acquired through illegal means such as torture and interrogation, and said it therefore stood.

During Bo Xilai’s trial last month the court took the unprecedented step of releasing details about proceedings on its Weibo microblog.

Bo Xilai was sentenced to life in prison on the bribery charges, 15 years for embezzlement and seven years for abuse of power. In addition all his personal wealth has been confiscated.

He has 10 days to appeal against his sentence and conviction, but correspondents say that any such move is highly unlikely to be successful. 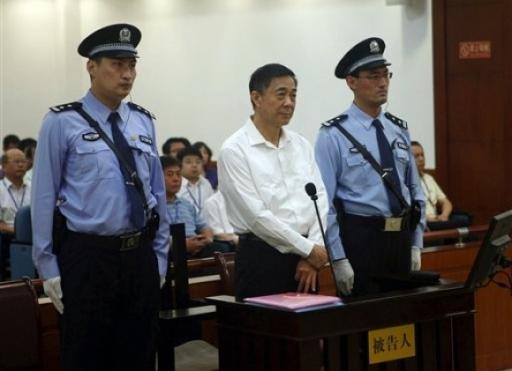 Bo Xilai has been found guilty of bribery, embezzlement and abuse of power and sentenced to life imprisonment

Although his trial was conducted under an unprecedented degree of openness for China, many analysts say that the guilty verdict was always a foregone conclusion – and many see the process against him as having a very strong political dimension.

Prosecutors had said that Bo Xilai accepted the bribes and embezzled public funds from Dalian, where he used to be mayor.

Bo Xilai was also accused of abusing his office by using his position to cover up for his wife Gu Kailai, convicted last year of murdering Neil Heywood in 2011.

In lengthy comments in court, he said he did not illegally obtain millions of dollars or cover up Neil Heywood’s killing.

He also dismissed the testimony of two key witnesses, describing his wife’s statement as “ridiculous” and his former police chief Wang Lijun’s testimony as “full of lies and fraud”.

Bo Xilai’s fall from power was triggered when Wang sought refuge in the US consulate in Chengdu in February 2012.

The incident prompted an investigation into the death of Neil Heywood. Wang Lijun has since been jailed for 15 years for helping Gu Kailai cover up the murder.

The Bo Xilai scandal triggered a crisis in the Communist Party, which was about to hold its once-in-a-decade leadership handover, and revealed divisions at the top of the party over how Bo should be handled.

Two years ago Bo Xilai was seen as a candidate for promotion to the Politburo Standing Committee, China’s top decision-making body.

His downfall was seen as the biggest political shake-up to hit China’s ruling elite in decades.

Bo Xilai’s trial also offered the public a rare glimpse into the life of China’s rich and powerful, with lurid details emerging of lavish vacations and luxury villas.

“I am an innocent victim and I feel wronged,” the letter read.

“But I believe one day truth will prevail…I will wait quietly in jail for that day to come.”