Rihanna has been enjoying a stay in Thailand as a break from her Diamonds World Tour.

Wearing swimming suit, Rihanna, 25, is seen in a variety of poses and scenarios where she is clearly at home in the Asian country.

In one she can be seen posing on a boat with an impressive skyline behind her. In another, she is seen looking backwards, over her shoulder, as a breeze makes her hair momentarily defy gravity.

Rihanna can then be seen receiving a hand-made flower bracelet from a local vendor, who then kisses her. 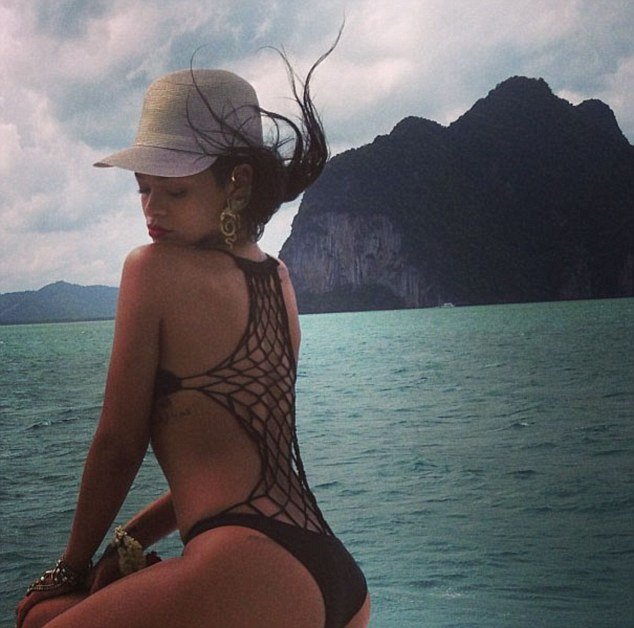 In typical Rihanna style, she also uploaded a more suggestive picture of her wearing a leather-effect wetsuit.

The chart-topping singer is obviously happy to share her experiences. She has been uploading a number of photographs of her travels in recent days.

Yesterday Rihanna published a number of fun pictures from a night out in Phuket, where she was greeted by several species of native animals – including tame elephants.

She also posted a funny shot with her alongside a scantily-clad woman and a leotard-wearing man – both of whom appear to be yelling at the singer.

“She was either tryna get married to me, or asking for the rest of my crop over costume! #Thailand #$treetLife,” Rihanna explained of the scene.

Rihanna flew into Thailand from Manila on Thursday, following her first gig in the Philippines for five years.

Her tour has so far played in more than 60 countries, with another 19 stops to go before it wraps on November 15.

Rihanna’s next gig is scheduled for Singapore this Sunday.