North Korea has decided to indefinitely postpone scheduled reunions of families separated by the Korean War, a government statement has said.

The statement did not provide details other than accusing unidentified conservatives in South Korea of “hostility” towards Pyongyang.

North Korea regularly makes such claims about the South.

The postponement is an apparent setback after weeks of gradually improving ties between the two countries.

The South Korean government has not yet responded to the announcement.

Relations reached a low point earlier this year when the North cut a military hotline to the South in March. That followed its third nuclear test in February, which triggered international sanctions.

The two Koreas were due to hold six days of family reunions from 25-30 September for people separated by the 1950-53 Korean War, following which millions of people were separated from their families by the dividing of the peninsula. 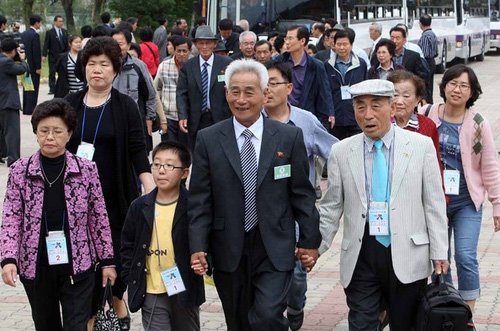 But the North’s Committee for the Peaceful Reunification of Korea was quoted as saying: “We postpone the impending reunions of separated families until a normal atmosphere is created for talks and negotiations to be able to move forward.”

“As long as the South’s conservatives deal [with] inter-Korean relations [with] hostility and abuse… such a basic humanitarian issue as family reunions cannot be resolved.”

The reunion programme was suspended after the North’s shelling of a South Korean border island in November 2010.

But only a few hundred participants are selected each time. Most do not know whether their relatives are still alive, because the two countries prevent their citizens from exchanging mail, phone calls and emails.

The reunions are often tearful and emotional occasions, correspondents say, in which North and South Koreans usually meet in the North for two or three days before the South Koreans head home again.

The reunion programme began in 2000 and sporadic events since then have seen about 17,000 relatives briefly reunited.