The House of Representatives voted to cut nearly $4 billion from food stamp funding even after Democrat Rep. Jackie Speier used some congressional dinner expenses as ways to try to shame them into supporting the funding.

The 217-210 vote on Thursday was a win for conservatives and it was approved even though Democrats were united in opposition.

The bill’s savings would be achieved by allowing states to put broad new work requirements in place for many food stamp recipients and to test applicants for drugs.

The bill also would end government waivers that have allowed able-bodied adults without dependents to receive food stamps indefinitely.

Democratic Representative Jackie Speier used her time on the floor to talk about the $3,588 that one of her Republican peers spent on meals during a trip to Russia and how another had a dining budget of $137.42 per day on a visit to Argentina, where she said he “probably had a fair amount of steak”.

Jackie Speier didn’t name the men that she was making references to, but CNN later identified them as Rep. Steve King who went to Buenos Aires and Rep. Frank Lucas who went on the trip to Russia where “he probably drank a fair amount of vodka and probably even had some caviar”.

Even though Jackie Speier brought a bottle of Smirnoff, some caviar and a plate of steak on the floor with her, it apparently didn’t drive the point home as the cut was approved even with 15 Republicans voting against the measure. 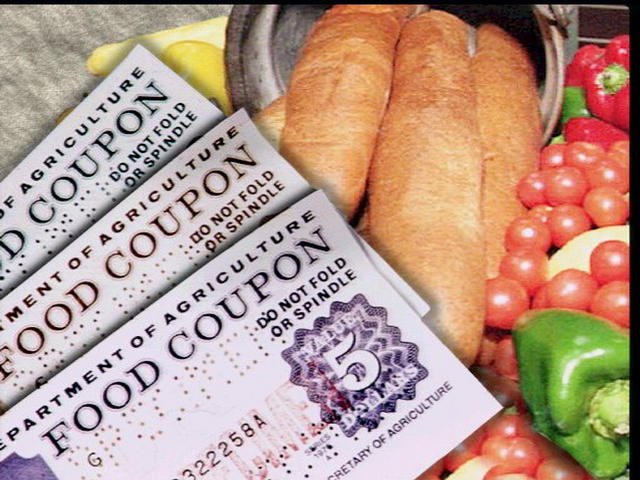 More than 47 million Americans are now on food stamps, and the program’s cost more than doubled in the last five years as the economy struggled through the Great Recession.

Democrats said the increase during tough economic times showed the program was doing its job.

“This bill is designed to give people a hand when they need it most and most people don’t choose to be on food stamps. Most people want a job … They want what we want,” Eric Cantor said on the floor just before the bill passed.

Finding a compromise – and the votes – to scale back the feeding program has been difficult. The conservatives have insisted on larger cuts, Democrats opposed any cuts and some moderate Republicans from areas with high food stamp usage have been wary of efforts to slim the program.

The White House has threatened to veto the bill.

The new work requirements proposed in the bill would allow states to require 20 hours of work activities per week from any able-bodied adult with a child over age 1 if that person has child care available.

The requirements would be applicable to all parents whose children are over age 6 and attending school.

Every Democrat voting on Thursday opposed the bill. Many took to the floor with emotional appeals.

Democratic House Minority Leader Nancy Pelosi said the bill is a “full assault on the health and economic security of millions of families”.

White House spokesman Jay Carney said Thursday that House Republicans are attempting to “literally take food out of the mouths of hungry Americans in order to, again, achieve some ideological goal”.

The Congressional Budget Office says that if the bill were enacted, as many as 3.8 million people could lose their benefits in 2014.

Around 1.7 million of those would be the able-bodied adults who would be subject to work requirements after three months of receiving food stamps.

The 1996 welfare law put that limit into law, but most every state has been allowed to waive that requirement since the Great Recession began in 2008.

The Census Bureau reported this week that just over half of those who received food stamps were below poverty and 44% had one or more people with a disability.

By state, Oregon led the nation in food stamp use at 20.1%, or 1 in 5, due in part to generous state provisions that expand food stamp eligibility to families.

Wyoming had the fewest households on food stamps, at 7%.