Two rival Syrian rebel groups in the northern town of Azaz have agreed a ceasefire.

The Islamic State in Iraq and Syria (ISIS), linked to al-Qaeda, seized the town on Wednesday from the larger Western-backed Free Syrian Army (FSA).

Fighting between rebel groups has raised fears of a war within a war.

The clashes come ahead of a deadline, on Saturday, for Syria to provide a list of its chemical weapons facilities as part of a US-Russian deal for the country to destroy its deadly arsenal.

But the agreement still faces many hurdles – including the differing opinions of the US and Russia.

US Secretary of State John Kerry said a “definitive” UN report had proved that the Syrian government was behind a deadly chemical weapons attack in the Damascus suburbs of Ghouta on August 21.

But Damascus – backed by Moscow – insists that rebel forces carried out the attack.

The West also wants any UN resolution on Syria’s chemical weapons to include the threat of military force in the result of non-compliance – but Russia objects to any mention of this.

Syria’s President Bashar al-Assad, in an interview with Fox News, said it could take about a year to destroy Syria’s chemical stockpiles and could cost about $1 billion.

Under the ceasefire deal in Azaz the two rebel sides have agreed to exchange prisoners and hand back property. 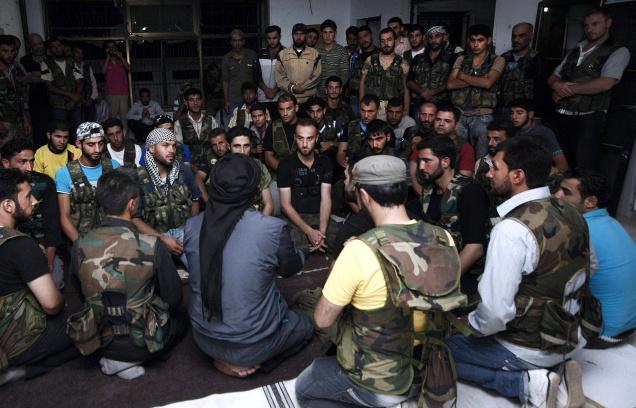 It is unclear whether the ceasefire will have an impact on clashes between the groups elsewhere in the country.

Analysts say there is more chance that the US and other Western powers may arm the Free Syrian Army if it shows a distinct separation from the Islamists.

The fighting in Azaz began when a wounded rebel – either from ISIS or from an allied group, al-Muhajireen – was taken to a field clinic and, while there, he was filmed as part of a fundraising exercise.

The wounded fighter demanded the film, and called some of his friends to come and help him.

ISIS is reported to have made a number of arrests of activists, journalists and even Sharia court officials during the time it controlled Azaz.

One eyewitness inside the town said no-one was smoking on the streets – tobacco is forbidden according to strict Islamist doctrine.

While the Azaz violence seems to have been the result of a particular set of circumstances rather than a long-planned offensive, our correspondent says there is a record of skirmishes between the Jihadis and FSA brigades for control of the border crossings into Turkey.

Meanwhile, the party of Syria’s Deputy Prime Minister Qadri Jamil insists he was misquoted in Friday’s edition of the UK’s Guardian newspaper.

Qadri Jamil reportedly told the paper that the civil war had reached stalemate, with neither government forces nor the rebels strong enough to win – and that the government would use proposed talks in Geneva to call for a ceasefire.

But the People’s Will Party said the Guardian journalist was ”neither precise nor professional” about what he quoted Qadri Jamil as saying.

Iranian President Hassan Rouhani has said Tehran is ready to help broker peace in Syria, as part of what he called his country’s “constructive engagement” policy with other nations.

In an article in the Washington Post newspaper, Hassan Rouhani wrote: “We must create an atmosphere where peoples of the region can decide their own fates.”

Correspondents say the article is the latest signal that Hassan Rouhani wants to improve Iran’s relationship with the US and other countries that believe Iran is developing nuclear weapons.