At least 97 people have been killed by storms that hit Mexico earlier in the week, according to authorities.

In the village of La Pintada, near the Pacific coast, a landslide partially engulfed the town.

At least 15 bodies have been recovered and almost 70 residents are missing, the authorities said.

A helicopter involved in the rescue effort in the area has disappeared with three crew on board, according to Mexican media.

Officials are hoping that the helicopter had to land amid bad weather conditions and that the crew has been unable to update their base on their location.

Police and navy teams are to begin looking for the helicopter early on Friday when visibility improves, the Excelsior newspaper reports.

Meanwhile, President Enrique Pena Nieto has announced in a statement that he is cancelling a planned trip to the UN in New York next week to focus on relief efforts.

Tropical Storm Manuel, which on Thursday briefly became a hurricane, has now moved north, forcing hundreds from their homes in Sinaloa state.

As it hit land, Hurricane Manuel brought torrential rain and winds of up to 75mph and caused flash floods in Sinaloa.

Schools in the region have been closed and a fishing village of Yameto was evacuated as Hurricane Manuel approached. 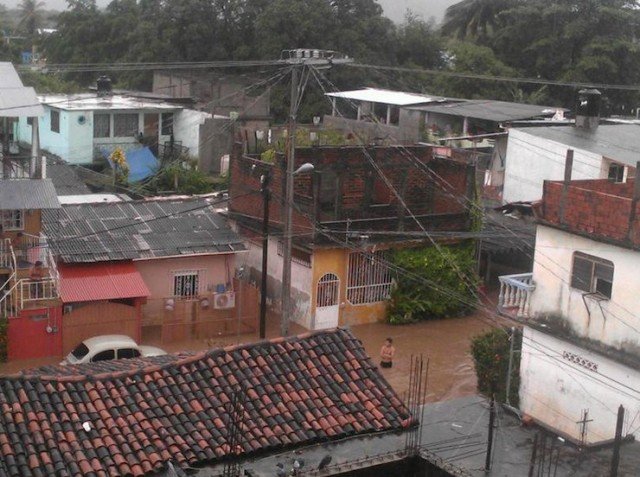 More than 100,000 were affected by the hurricane, the State governor, Mario Lopez Valdez told reporters.

It then gradually began losing strength, according to the United States National Hurricane Center, going back to being a tropical storm.

Hurricane Manuel is now expected to dissipate before the weekend.

However, weather conditions are expected to remain poor over the coming days as a third storm is forecast.

With the Gulf Coast having been hit by Hurricane Ingrid, this week was the first time since the 1950s that Mexico has had to deal with two storms simultaneously.

The resort town of Acapulco and its surrounding areas were worst hit by Hurricane Manuel earlier in the week.

Since then, more than 10,000 stranded tourists have been airlifted by military planes out of the resort town of Acapulco.

Several stores have been looted and residents of the outskirts of Acapulco have complained about being left to fend for themselves.

Residents of La Pintada, a remote village of about 600 people north-west of Acapulco, described how the hillside buried their homes as they were holding independence day celebrations on Monday evening.

The landslide tore through the middle of the village, destroying the church, the school and the kindergarten.

“We were eating when it thundered, and when the mountain collapsed the homes were swept away and the thundering noise became louder,” Erika Guadalupe Garcia told AFP news agency.

Ana Clara Catalan, 17, described the noise as “ugly, worse than a bomb”.

Most of the residents have been now been evacuated by helicopter.

Hurricane Ingrid made landfall on Monday in the town of La Pesca on Mexico’s Gulf Coast. It mainly affected the state of Tamaulipas, where thousands of people were moved from low-lying areas to higher ground.