Egyptian soldiers have clashed with militants after entering Kerdasa, a town near Cairo.

Eleven police officers were killed at a police station in Kerdasah last month, weeks after the overthrow of Islamist President Mohamed Morsi in July.

In the hours before police and soldiers moved in, the mood in the town was defiant.

Thousands of people attended a pro-Morsi rally on Wednesday night amid shouts of “Down with Sisi”, referring to the head of the army.

The authorities had promised to respond to the deadly attack on the police station in August. 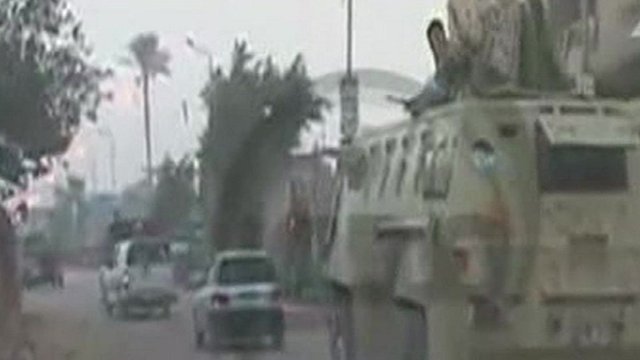 Egyptian soldiers have clashed with militants after entering Kerdasa, a town near Cairo

After performing dawn prayers, the troops began taking their positions in armored vehicles ready for the start of the operation, Mena reported.

“I can’t be responsible if you get shot,” an officer was heard telling a local man.

An Egyptian interior ministry spokesman told Nile News: “There are still some armed elements on rooftops in Kerdasah and we are currently dealing with them.”

In a separate incident on Thursday, several metro lines in the capital were disrupted after two unexploded bombs were found on the tracks near Hilmiyat al-Zaytun station in the south of Cairo.

Security officials said bomb experts were dispatched to the scene and defused the “primitive” devices before rail services resumed.

At least 1,000 people – including about 100 police officers – have died in unrest following President Mohamed Morsi’s removal from power.

Kerdasa, known for producing and selling textiles, is 8.7 miles from Cairo.

Egyptian forces arrested dozens of residents during a raid on Monday on pro-Morsi supporters in the town of Delga, Minya province, about 200 miles south of Cairo.