The discovery of two rusting vintage cars containing six bodies under Foss Lake in Oklahoma has reignited the mystery of how three teenagers and three other people vanished in 1970.

Police say the Camaro matches the vehicle associated with the three missing teenagers who disappeared on November 10 1970.

They say they have confirmed the identity of at least one of the victims however details are yet to be released.

Authorities have not formally identified all of the remains belong to but the local paper has made a clear connection between the discovered Camaro and the teens.

The latest reports by local station KFOR states that one of the victims in the car thought to have belonged to the teenager has been identified but they are waiting to notify all of the relatives of the victims involved before releasing any names.

They are still listed as missing persons and were thought to have been headed to a football game in nearby Elk City but also could have detoured to go hunting at Foss Lake. 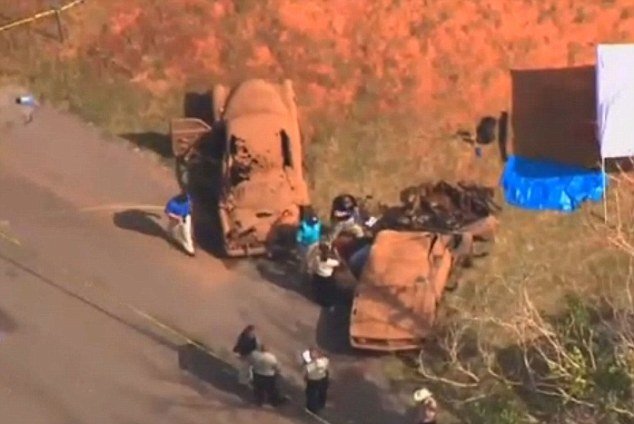 In addition to the Custer County Sheriff’s Department, the Oklahoma Highway Patrol, the Oklahoma Bureau of Investigation, and the state medical examiner’s office were on scene Tuesday.

Authorities discovered the accidentally as Betsy Randolph, spokeswoman for the Oklahoma Highway Patrol, said dive teams were at Foss Lake conducting training with sonar when they came upon the vehicles last week.

When they pulled the second car out, another set of bones was discovered. The divers then went back in the water and searched around and found a skull, she said.

The remains were turned over to the medical examiner’s office who are expected to use DNA from surviving family members to identify the skeletons.

Custer County Sheriff Bruce Peoples said he believes the bodies found in the Camaro are those of the three teens who went missing in 1970.

He said: “The decomposed nature of the cars makes it difficult to positively identify here at the scene.”

At the time of the disappearance, Kim Carmichael’s father was the undersheriff in nearby Beckham County where the teens were last seen.  He died in 2003 never knowing what happened.

Spokesman Betsy Randolph added: “We’re hoping these individuals, that this is going to bring some sort of closure to some families out there who have been waiting to hear about missing people.”