A government audit has found that budget cuts may have been the cause for lax security at the Washington D.C. Navy Yards where 12 people were shot dead and eight others were injured on Monday morning.

According to a yet-to-be-released government audit, federal oversight investigators concluded that the reduced security measures at the base left security risks unaddressed.

A report by the Department of Defense Inspector General’s office shows that they were concerned about the access that would be granted to outside contractors – like that of Aaron Alexis, the suspect who was killed by police during the Monday morning shooting.

The report states that the Navy “did not effectively mitigate access control risks associated with contractor installation access” to the Navy Yards.

Time Magazine published excerpts from the report after having been read portions by an unidentified federal official who had access to the Inspector General’s findings.

The security risks are placed squarely on the Navy administrators who were trying “to reduce access control costs”.

The process of gaining access to the administrative facility- where about 3,000 people work- is under severe scrutiny.

In a Monday night press conference, FBI assistant D.C. director in charge Valerie Parlave said that they concluded Aaron Alexis had legitimately accessed the building as his status as a contractor would have given him sufficient credentials to enter unquestioned. 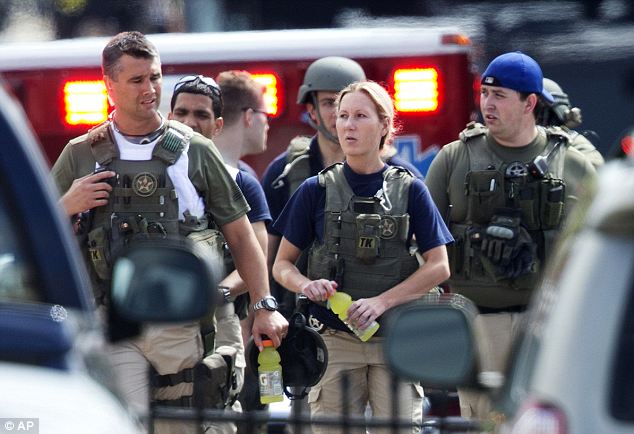 Budget cuts may have been the cause for lax security at the Washington D.C. Navy Yards where 12 people were shot dead and eight others were injured

“He utilized a valid pass,” Valerie Parlave said during the press conference.

Aaron Alexis, 34, became a full-time Navy reservist in 2007 but was dismissed in 2011 following a series of ‘misconduct’ violations.

As a contractor for a group working for a subcontractor used by Hewlett-Packard, Aaron Alexis had the proper identification to be allowed into Navy Yard’s Building 179 where he began shooting.

“He did have a secret clearance. And he did have a CAC [common access card],” said Thomas Hoshko, CEO of subcontracting group The Experts Inc who employed Aaron Alexis.

“We had just recently re-hired him. Another background investigation was re-run and cleared through the defense security service in July 2013.”

Another problem with Aaron Alexis that should have been flagged up by the security access system is that he had two prior arrests- one in 2004 for shooting someone’s tires in an anger-fueled “blackout” and another in 2010 when he said that he accidentally fired into a neighbor’s apartment while cleaning his gun.

The security assessment report cites the fact that a number of people with criminal histories were able to bypass the Navy Yard’s security without any alarm.

The research into the security inefficiencies at Navy Yard began in September 2012 and carried on through August of this year. The final report will be published within the next 30 days.