A UN report has confirmed “unequivocally and objectively” that chemical weapons have been used in Syria.

The report says sarin gas was used in a rocket attack in the Syrian capital, Damascus, last month, although it has not attributed blame.

“This is a war crime,” Secretary-General Ban Ki-moon said.

US allegations that the government was responsible led to threats of military action and then a US-Russia deal for Syria to make safe its chemical arms.

World powers will now try to hammer out a UN Security Council resolution.

Meanwhile, Turkey said it had shot down a Syrian helicopter close to its border. Deputy PM Bulent Arinc said the aircraft was engaged by fighter jets after violating Turkish air space.

Ban Ki-moon has been briefing the Security Council on the report, and is then expected to address the media.

He said he was submitting the UN mission’s report “with a heavy heart”.

“The mission has concluded that chemical weapons were used on a relatively large scale in the Ghouta area of Damascus [on 21 August]… The attack resulted in numerous casualties, particularly among civilians.”

Ban Ki-moon spoke of the suffering of the victims. 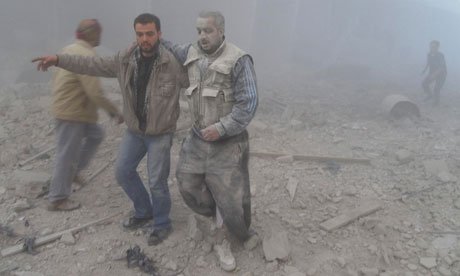 “Survivors reported that following an attack with shelling, they quickly experienced a range of symptoms, including shortness of breath, disorientation, eye irritation, blurred vision, nausea, vomiting and general weakness.

“Many eventually lost consciousness. First responders described seeing a large number of individuals lying on the ground, many of them dead or unconscious.”

The UN investigators examined many samples from the scene.

Ban Ki-moon said: “On the basis of its analysis, the mission concluded that it – and I quote – <<collected clear and convincing evidence that surface-to-surface rockets containing the nerve agent sarin were used in the Ein Tarma, Moadamiyah and Zalmalka in the Ghouta area of Damascus>>.”

Ban Ki-moon added: “I trust all can join me in condemning this despicable crime. The international community has a responsibility to hold the perpetrators accountable.”

He said the mission was unable to verify the number of casualties, but referred to the “terrible loss of life on 21 August”.

He added: “This is the most significant confirmed use of chemical weapons against civilians since Saddam Hussein used them in Halabja in 1988.”

Assigning blame for the attack in Ghouta was not part of the inspectors’ remit.

However, diplomats have suggested the way the facts are reported may point to the Syrian government as the perpetrators.

Syrian President Bashar al-Assad has denied allegations his government was behind the attack, instead blaming the rebels.

Earlier, Paulo Pinheiro, the chairman of the UN Commission of Inquiry on Syria, said the commission had been investigating 14 alleged chemical attacks since it began monitoring Syrian human rights abuses in September 2011.

Paulo Pinheiro said investigators had not so far been able to assign blame and were awaiting details from Monday’s UN report.

He said the commission believed both President Assad’s government and the rebels were responsible for war crimes, but that the regime alone had perpetrated crimes against humanity.

War crimes, including mass executions, rape and torture, were continuing, the commission said.

Its investigators said a referral to the International Criminal Court was imperative.

The UN Security Council is expected to draft a resolution in the coming days.