Nina Davuluri has become the first Indian-American to win Miss America contest in its 92-year history.

Nina Davuluri, 24, was crowned on Sunday evening as Miss America on the nationally televised pageant, which returned home this year to Atlantic City.

The Indian-American beauty overcame accusations that she bad-mouthed others entrant to win the contest. And within minutes of winning, Nina Davuluri then faced racist comments on Twitter, some of which have already been pulled down.

Nina Davuluri has shrugged off the hateful comments. In interview after being crowned Miss America, she said: “I have to rise above that… I always viewed myself as first and foremost American,” Associated Press reported.

While the majority of people online rushed to congratulate the new Miss America, whose $50,000 prize money will help fund her stated ambition of attending medical school, racist comments also began to trickle onto the web.

She succeeds another Miss New York, Mallory Hagan, whose tenure was cut short when the pageant moved back to Atlantic City after a six-year stint in Las Vegas, where winners were chosen in January.

It has been reported that there is bad blood between the pair after Nina Davuluri allegedly called her predecessor “fat as s***”.

However competition authorities say the allegation has been proved false. It is thought one of her entourage made the insulting remark.

After winning the Miss New York competition on July 16, Nina Davuluri invited friends back to her hotel room to celebrate, and that’s when another competitor overheard her slinging insults at Mallory Hagan.

In addition to the fat comment, friends of Nina Davuluri were heard making racist comments, reports the New York Post.

Following the incident, Nina Davuluri apologized for her friends’ comments on Facebook, but said she did nothing wrong.

“I want to apologize for the awful statements made by people in my room… There were people who claimed to be my supporters and said things I never agreed with, nor supported,” Nina Davuluri wrote.

“I was never a part of the words or statements that may have been hurtful… I’m sorry if someone said something that was inappropriate.”

A representative for Mallory Hagan said that the situation was investigated in July and that there is “no validity to the story whatsoever”.

“Miss New York spoke to Mallory Hagan to let her know there was no validity and to apologize if she was offended in any way,” the rep said. 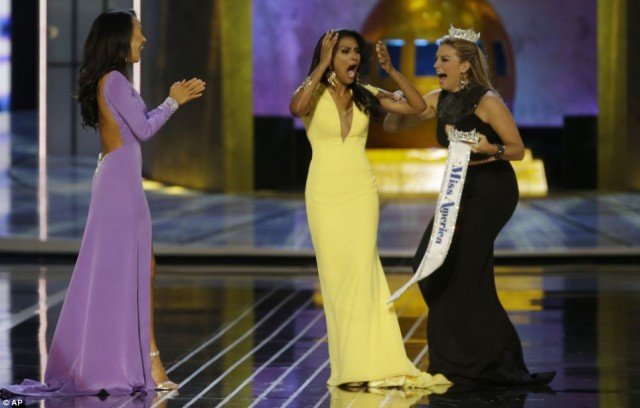 Moments after winning the 2014 Miss America crown, Nina Davuluri described how delighted she is that the nearly century-old pageant sees beauty and talent of all kinds.

“I’m so happy this organization has embraced diversity,” she said in her first press conference after winning the crown in Atlantic City, N.J.’s Boardwalk Hall.

“I’m thankful there are children watching at home who can finally relate to a new Miss America.”

Her pageant platform was “celebrating diversity through cultural competency” and she had performed a classical Bollywood fusion dance for her talent competition.

Nina Davuluri, a native of Syracuse, N.Y., wants to be a doctor, and is applying to medical school, with the help of a $50,000 scholarship she won as part of the pageant title.

Her victory led to some negative comments on Twitter from users upset that someone of Indian heritage had won the pageant. She brushed those aside.

“I have to rise above that,” she said.

“I always viewed myself as first and foremost American.”

After the traditional frolic in the Atlantic City surf Monday morning, Nina Davuluri will head to the scene of a devastating boardwalk fire in the New Jersey communities of Seaside park and Seaside Heights on Monday afternoon.

The pageant had pitted 53 contestants – one from each state, plus the District of Columbia, Puerto Rico and the U.S. Virgin Islands – in swimsuit, evening gown, talent and interview competitions.

“This is where we belong,” said Sam Haskell, CEO of the Miss America Organization.

“This is the home of Miss America, and this is where we’re going to stay.”

Much attention had been given to Miss Kansas, Theresa Vail, who is believed to be the first Miss America contestant to openly display tattoos. She has the Serenity Prayer on her rib cage and a military insignia on the back of a shoulder.

In a Twitter message Sunday, Theresa Vail wrote: “Win or not tonight, I have accomplished what I set out to do. I have empowered women. I have opened eyes.”

Theresa Vail made it to the Top 10 and won a nationwide voters’ choice award propelling her into the semi-finals.

Another noteworthy contestant was Miss Florida, Myrrhanda Jones, who made it into the top 5 while wearing a bejeweled knee brace. She tore ligaments in her knee while rehearsing her baton twirling routine on Thursday. Sunday night, she performed the routine flawlessly.

Mallory Hagan, whose tenure was cut short when the pageant moved back to Atlantic City after a six-year stint in Las Vegas, where winners were chosen in January.

Mallory Hagan, who had only been Miss America since January, was photographed on a beach in Hawaii this past spring having put on a few pounds since being crowned the winner in Las Vegas.

She addressed her weight gain on Anderson Cooper Live saying: “Well you know I think that I am human I like to equate getting ready for the Miss America pageant to getting ready for a boxing match. We get in shape and then afterwards life goes back to normal.”

Mallory Hagan stressed that being healthy is all about balance.

“It’s all about being healthy, we’re all about living a healthy lifestyle. Some days you want to eat potatoes and some days you don’t.”

Nina Davuluri told the Syracuse Post-Standard that she was 60 lbs heavier during her final semesters at the University of Michigan and struggled with bulimia.

One day she looked at a picture of herself and finally realized just how much weight she had put on. She thought to herself: “This is not who I want to be, and it is not the way I want to portray myself to the world.”

So upon entering the beauty pageant world, Nina Davuluri got a personal trainer and started eating healthy.

She said she doesn’t give out her weight, fearing that other women would try to make that their goal.

However, Nina Davuluri says her current weight is hardly what she’d define as “skinny”.

Both Mallory Hagan and Nina Davuluri have competed in past Miss New York competitions together.

Nina Davuluri was second runner-up the year that Mallory Hagan was crowned Miss New York and went on to win Miss America.

Miss America pageant contest started in Atlantic City as a way to extend the summer tourism season for an extra weekend.