Duck Dynasty’s Si Robertson introduced his wife Christine in a special video on Good Morning America, along with the release of his new book, Si-Cology 1: Tales and Wisdom From Duck Dynasty’s Favorite Uncle.

Silas is younger brother to Phil Robertson, the patriarch of the popular reality television family and founder of the Duck Commander.

Si Robertson began working for the family business in the 1990s, after retiring from 25 years of service in the military. He is a Vietnam veteran, and still carries around the plastic cups that his mother had sent him when he was away at war. 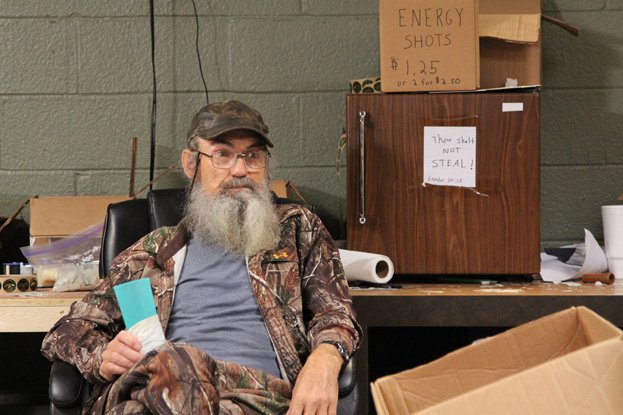 While the show may portray Uncle Si as being single, he has been married for 43 years and has two grown children, Scott and Trasa.

Si Robertson said that readers of Si-cology 1 might be surprised to learn that “one woman’s got my heart, and we’ve been married for 43 years. Her name is Miss Christine.”

Christine and Si Robertson still seem to be very much in love, hugging each other sweetly in the video message. He said he had asked his wife to marry him about a hundred times.

“It was about 75,” Christine Robertson joked.

“Put three bags in a pot of water, turn the heat on the water and let it boil, put a saucer over it and let it seep. Then pour it into a gallon jug and then I drink.”