Brad Pitt has revealed a new short haircut as he arrived on the set of his new film Fury in London.

His formerly grungy long locks were gone, replaced by a short back and sides and a slicked back style.

Brad Pitt complemented the retro hairstyle with a pair of heavy rimmed glasses and a neat goatee beard.

He also wore a preppy, all-grey outfit of an overcoat, simple T-shirt, trousers and boots. 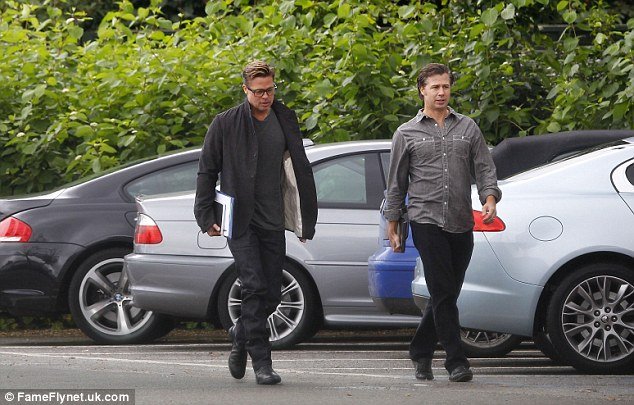 Brad Pitt, 49, is playing the role of a soldier who is part of a five-man crew of a tank named Fury during the final weeks of World War II.

Brad Pitt is starring alongside big name actors including Shia LaBeouf, Michael Pena, Logan Lerman and Jon Bernthal in the film, which is scheduled for release in November 2014.

To prepare for the role Brad Pitt has driven a tank through the British countryside accompanied by instructors.

Brad Pitt also surprised a wedding party by crashing their reception at the Stoke Park Hotel in Stoke Poges, Bucks, where he was staying the night after filming.