Vladimir Putin and a group of American politicians had an arm-wrestling match a few years after the fall of the Berlin wall.

In an interview on Southern California Public Radio this week, Representative Dana Rohrabacher, a California republican, talked about the time he met Vladimir Putin and was matched up against him in an impromptu arm-wrestling competition.

Vladimir Putin was part of a delegation of young Russian political leaders who traveled to California in the early 1990s.

At the time, Vladimir Putin was just the deputy mayor of St Petersburg but Dana Rohrabacher already knew he must be more important since he had his own bodyguard.

They met with Dana Rohrabacher, a former speechwriter for President Ronald Reagan, and other politicians including Scooter Libby.

Dana Rohrabacher, invited the delegation to play a game of American football over the weekend and Vladimir Putin and a few others agreed. 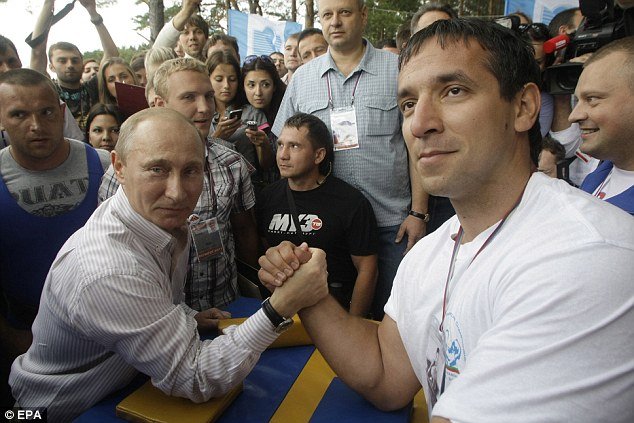 The teams were mixed with both Russians and Americans so no one country won.

Afterwards the men went to drink at an Irish pub and that’s when things got interesting.

“We were having a little but too much to drink I guess, but anyway we all started arguing about who won the Cold War,” Dana Rohrabacher said.

“And so we decided to settle it like men do when they’ve had too much to drink in the pub.”

They started setting up arm-wrestling matches and Dana Rohrabacher was matched up against the future president of the Russian Federation.

“He’s a little guy, but boy I’ll tell ya, he put me down in a millisecond,” Dana Rohrabacher said of Vladimir Putin, a former KGB officer.

“He is tough. It’s just being you know, muscles are just unbelievable.”

But the Americans didn’t completely lose that day.

Dana Rohrabacher says his friend was matched up against Vladimir Putin’s large bodyguard, and the bodyguard surprisingly lost.

That match taught Dana Rohrabacher something about Vladimir Putin that he believes translates to the current Russian intervention in Syria’s chemical weapons arsenal.

“He’s a tough guy and he’s supposed to be a tough guy, and that’s what the Russian people want, but there’s no reason that we shouldn’t try to work with him,” Dana Rohrabacher said.