Costa Concordia salvage will go ahead on Monday, Italian officials have confirmed.

The Civil Protection agency said the sea and weather conditions were right for the salvage attempt.

Engineers have never tried to move such a huge ship so close to land.

Thirty-two people died when the cruise ship hit rocks off the Tuscan island of Giglio in January 2012. It has been lying on its side ever since.

The salvage operation is due to begin at 06:00 on Monday, and it is being described as one of the largest and most daunting ever attempted. 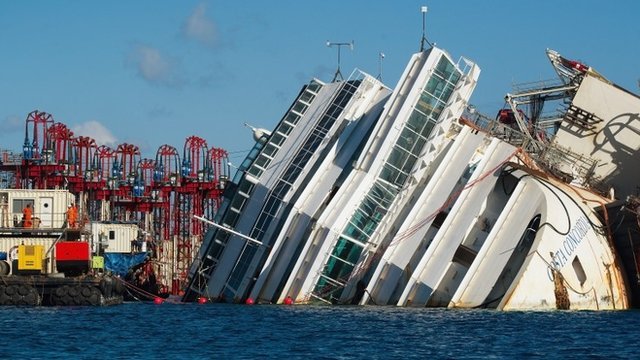 Costa Concordia salvage will go ahead on Monday

The head of the operation, Nick Sloane, told AFP news agency that it was now or never for the Costa Concordia, because the hull was gradually weakening and might not survive another winter.

Engineers will try to roll the ship up using cables and the weight of water contained in huge metal boxes welded to the ship’s sides – a process called parbuckling.

More boxes will then be attached to the other side, and the water will be replaced with air to add buoyancy, allowing the vessel to be towed away and broken up for scrap.

If the operation goes wrong, environmentalists warn that toxic substances could leak out into the sea.

For the people of Giglio, the salvage operation will be an important moment – and a special prayer was said during Sunday Mass.

The salvage project has so far cost more than 600 million euros ($800 million) and could cost a lot more by the time the operation is complete.