LeBron James, 28, and his new wife held their ceremony at the Grand Del Mar hotel less than three months after he won his second straight NBA title with Miami Heat.

A ceremony was said to have been held in the hotel’s Capella Chapel at 4.30 p.m., with celebrations lasting three days.

The high school sweethearts, who have two children, announced their engagement in January last year.

Guests, including LeBron James’s teammate Dwayne Wade, Beyoncé and Jay-Z, were welcomed to the wedding on Friday, with a barbecue and the festivities are expected to last until a farewell brunch on Sunday. 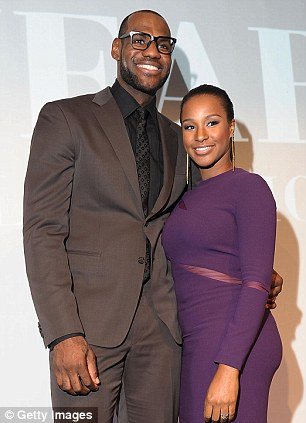 Other guests including Dwayne Wade’s girlfriend Gabrielle Union, and NBA players Chris Paul and Carmelo Anthony, according to People.

Hotel staff and pretty much everyone involved with the wedding were asked to sign non-disclosure agreements, but one tell-tale sign about the venue is about to host something out of the ordinary is the large tent that’s been erected outside.

The extravaganza was organized by celebrity wedding planner Preston Bailey, who also oversaw internet entrepreneur Sean Parker’s $10 million ‘Lord of the Rings’-themed wedding to Alexandra Lenas back in June.

LeBron James’ big day was expected be a slightly more muted affair. The guest list was expected to only number in the hundreds, rather than the thousands that have attended some NBA All-Star’s nuptials.

“He cut the list down because he didn’t want to have 1,000 people at the wedding,” a source told the New York Post.

This weekend’s wedding also clashes with Yom Kippur, the Jewish day of atonement.