Twitter plans to join the stock market in the most hotly anticipated flotation since Facebook’s last year.

Referring to the official paperwork needed to join the market, the company tweeted: “We’ve confidentially submitted an S-1 to the SEC for a planned IPO [initial public offering].”

Twitter gave no further details as to the timing or price of the offering.

The microblogging service is on track to post $583 million in revenue in 2013, according to advertising consultancy eMarketer, up from $288 million in 2012.

Most of Twitter’s funding comes from advertising, with companies paying for “promoted tweets” that appear in users’ Twitter feeds. 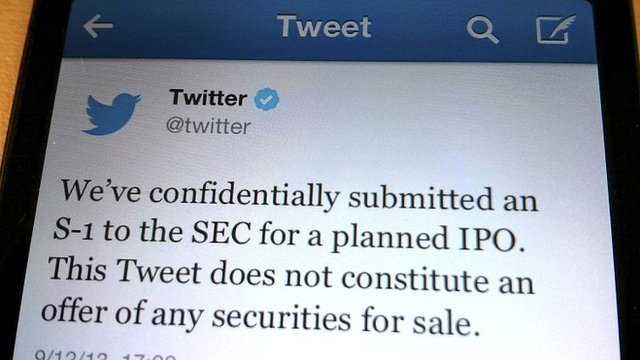 But some analysts believe the risk for Twitter post-flotation is that if the drive for greater advertising revenue leads to increased numbers of adverts in and around the site, they could become intrusive and unpopular with users.

Nearly two-thirds of users access Twitter via mobile devices that have traditionally been difficult for advertisers to reach.

This is one reason why Twitter has acquired MoPub, a mobile-focused advertising exchange, for a reported $350 million.

Facebook listed on the stock market in May last year. Although it initially created excitement among investors, its share price performed poorly, before recovering this summer.

The timing of the IPO is likely to be related to renewed activity in stock market flotations. There have been 131 IPOs priced so far in 2013, according to IPO tracking firm Renaissance Capital – a 44% increase on the same period last year.

Analysts say Twitter must continue to innovate under the scrutiny of public ownership.

Once a company has filed paperwork with US regulators for a planned IPO, it enters a so-called “quiet period” when it is not allowed to speak to the media.

According to the Securities and Exchange Commission’s website, a company can file a confidential prospectus for a public share sale if it is classified as an “emerging growth company” with revenue of less than $1 billion.