At a makeshift court in the company warehouse, Si Robertson failed to make a single basket, despite using a trick shot called “the crane.”

Employee Justin Martin, meanwhile, was bonked by a basketball in a sensitive area and had to take a few minutes to recover. And despite having a new pair of shoes that looked like a cross between vintage Air Jordans and a pair of pogo sticks, Jep Robertson could not manage to sink a single shot.

“These shoes are for training, not for actual dunking in,” Jep Robertson explained after his humiliating display.

But the boys had bigger problems than their basketball skills: They discovered that the warehouse was infested with termites.

Wasting no time, the Robertsons called an exterminator, who promptly covered the entire Duck Commander warehouse with an enormous red and yellow striped tent.

“All of this for some little termites?” asked Jase Robertson.

“Anything living or crawling in there, I want to kill. Kill ‘em all.”

Since the boys were unable to work in the warehouse while the exterminator fogged the building, Willie Robertson sent the crew off to John Godwin’s house to work.

Not wanting to miss an opportunity to show off her “successful, good-looking, charming” son, Miss Kay instructs Willie Robertson to take the afternoon off so that he speak at her social club, the Golden ‘60s.

“When you’re the CEO, people look up to you,” Willie Robertson explained. 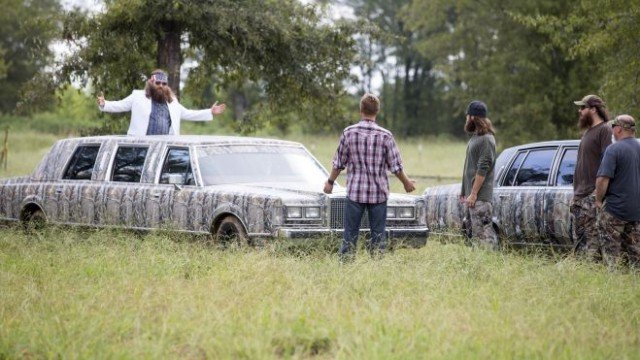 “They want to know the secrets to you your success.”

Dressed in a sharp white jacket, Willie arrived at the social club where he met his mother and half a dozen senior ladies.

Looking very uncomfortable, Willie asked Miss Kay if he should begin speaking to the group. Instead, he is ordered to “go get the lunch.”

“Go get the what?” asked Willie, confused.

“I’m not going to get the lunch. I’m speaking.”

“Let me tell you about my crew,” explained Jase Robertson.

“We will work anywhere, anytime. But we are at our best when we have snacks and air conditioning, and no Willie.”

After finishing their popsicles, Uncle Si Robertson unwraps a package with John Godwin’s “inheritance” from his Uncle Ruben, a stuffed jackalope, which is allegedly “part rabbit and part deer.”

“Godwin, I’m telling you that’s worth some money,” Uncle Si said of the dead creature.

With that, the boys head out to McGough’s Taxidermy get the furry figure appraised.

“Who gets excited about a building filled with stuffed animals?” he asked rhetorically.

“I certainly don’t. Animals should be eaten, not stuffed. The only animal I stuff is a turkey on Thanksgiving, sometimes Christmas.”

Sadly, John Godwin’s jackalope was appraised at only $50.