Tumbledown Trails Golf Course in Verona, Wisconsin, could be forced to close after offering a promotion for nine holes for $9.11 on the 12th anniversary of the September 11 terrorist attacks.

The company was immediately lambasted online as distasteful and was forced to apologize on its Facebook page. It said it is now considering closing on September 11, as staff fear a backlash.

“Please stay tuned to see if we will be open on Weds 9/11,” the posting read. 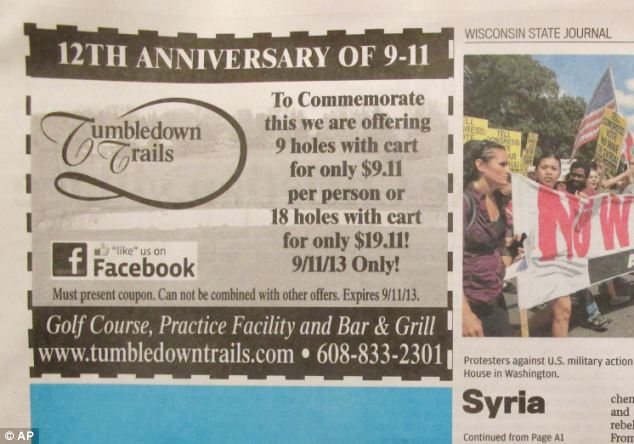 Tumbledown Trails Golf Course in Verona could be forced to close after offering a promotion for nine holes for $9.11 on the 12th anniversary of the September 11 terrorist attacks

“We are now worried about what people will do/say to our staff & do not want anything to happen or get out of control. Sorry for the inconvenience this may have caused anyone.”

Club owner and general manager Marc Watts told The Associated Press that no disrespect was intended with the advert.

Marc Watts said people are even calling the club with death threats, adding that a sheriff’s deputy has now been stationed there.

The course officials said that booked tee times for Wednesday will be honored and that other golfers will pay the normal rate. The difference between the rates will be donated to the 9/11 Memorial.

“We hope that everyone will now see this as a positive as we really meant it to be,” the Facebook post read.

“Again, we do sincerely apologize for offending anyone & hope that you do accept our sincere apology.”

Nearly 3,000 people died in the 2001 attack on the World Trade Center and the Pentagon, and in a hijacked flight that crashed in Shanksville, Pennsylvania.