Home Breaking News Bashar al-Assad PBS interview: US has no proof of chemical weapons use

In an interview with PBS, Syrian President Bashar al-Assad said there is “no evidence” that his government has used chemical weapons.

In the interview, to be aired on Monday, Bashar al-Assad also suggested his allies would retaliate if the West attacked.

US Secretary of State John Kerry has been lobbying hard for military action against Bashar al-Assad during talks with EU and Arab foreign ministers in Europe.

Congress is due to debate whether to authorize intervention in Syria.

Lawmakers will return from their summer recess on Monday to start discussing President Barack Obama’s resolution to launch a “limited, narrow” strike.

A Senate vote on the issue is expected as early as Wednesday, although the timetable for Barack Obama’s request is less certain in the House, where the measure faces an even rockier time.

The US accuses Bashar al-Assad’s forces of killing 1,429 people in a sarin gas attack on 21 August on the outskirts of the capital, Damascus.

Bashar al-Assad’s government blames the attack on rebels fighting to overthrow him in the country’s two-and-a-half-year civil war, which has claimed some 100,000 lives, according to UN estimates.

In his interview with PBS, the Syrian president said it was up to the US to prove that his forces were behind the Damascus attack. 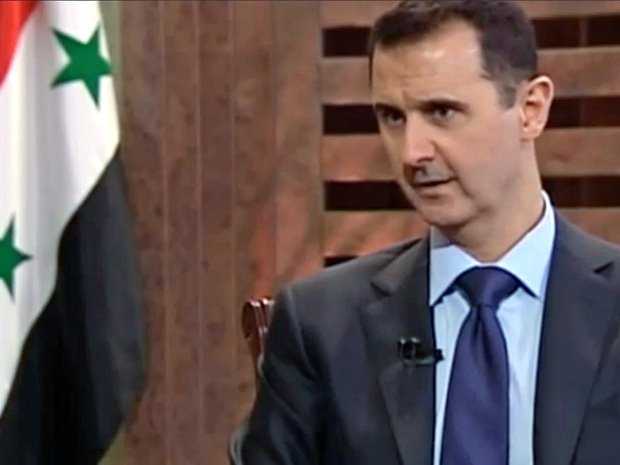 In an interview with PBS, Syrian President Bashar al-Assad said there is “no evidence” that his government has used chemical weapons

“There has been no evidence that I used chemical weapons against my own people,” he told the network.

Bashar al-Assad would neither confirm nor deny that his government kept chemical weapons, but said that if they existed, they were “in centralized control”.

He also reportedly “suggested that there would be, among people that are aligned with him, some kind of retaliation if a strike was made”, PBS said.

Syria’s allies include China and Russia, as well as Iran and the militant Hezbollah movement in Lebanon.

On a visit to Moscow, Syrian Foreign Minister Walid Muallem said the US was using the issue of chemical weapons as a “pretext” to launch a war.

Russian Foreign Minister Sergei Lavrov said there was no alternative to a peaceful solution to the crisis – and Moscow was convinced it was possible.

“We appeal to our American colleagues to concentrate on this [the Geneva conference] and not for preparing for a war scenario”.

The White House has admitted it has no “irrefutable” evidence of Bashar al-Assad’s involvement in the August attack, but said a “strong common-sense test irrespective of the intelligence” suggested his government was responsible.

“We’ve seen the video proof of the outcome of those attacks,” White House Chief of Staff Dennis McDonough said on Sunday.

“Now do we have a picture or do we have irrefutable beyond-a-reasonable-doubt evidence? This is not a court of law and intelligence does not work that way.”

John Kerry will meet UK Foreign Secretary William Hague in London on Monday morning, before returning to the US in the afternoon.