South African chef Albert Buitenhuis, who is facing deportation from New Zealand for being too fat, has been given a 23-month reprieve.

However, Albert Buitenhuis will not be allowed any publicly-funded healthcare, a government official said.

Albert Buitenhuis, who weighs 286 lbs, appealed two months ago after his work visa renewal application was rejected on the grounds he did not have “an acceptable standard of health”.

He has shed 67 lbs since he moved to the city of Christchurch six years ago. 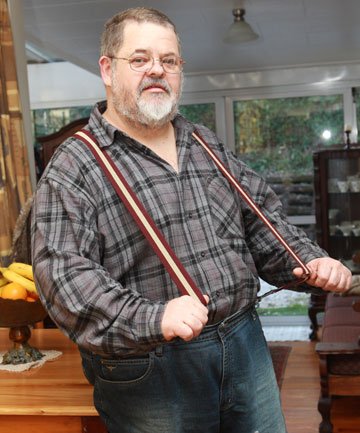 Albert Buitenhuis, who is facing deportation from New Zealand for being too fat, has been given a 23-month reprieve

Associate Immigration Minister Nikki Kaye said the main reason Albert Buitenhuis’s application had been declined was due to the osteoarthritis in his knee.

However, she granted Albert Buitenhuis and his wife, Marthie, visa extensions but said he would “have to meet any health costs himself”.

Albert Buitenhuis, who wrote about his experiences in a blog called The Too Fat Chef, told local media that the government’s decision was “bitter sweet”.

“Of course, we are pleased and relieved that we are now able to stay. But at the same time we would rather rewind so that none of this took place,” he said in an interview with Fairfax media.

“We are really starting from scratch again. We have lost thousands of dollars fighting this and we don’t know where we will live because our home is gone. I am glad the fight is over but I am still afraid of what lies ahead.”

Albert Buitenhuis, who is 5ft 10in tall, said he aims to lose another 55 lbs over the next few months.

The immigration department has said it is important that “all migrants have an acceptable standard of health to minimize costs and demands on New Zealand’s health services”.