Home World U.S. News Ariel Castro hanged himself with a sheet during a break between inspections

Ariel Castro showed no signs that he wanted to commit suicide, says the psychiatrist who passed the Cleveland kidnapper fit for trial.

Ariel Castro, 53, was found hanging in his cell at Correctional Reception Center in Orient, Ohio, on September 3 at 9.20 p.m., just 33 days after he was handed down a 1,000 year prison term for the rape, torture and kidnap of three women.

“It’s possible that he had a suicidal desire and covered it earlier. I would think it’s more likely this was triggered by some stressful events,” said Dr. Phillip Resnick.

“He did not convey suicidality at all to me. So that was not something foreseeable,” the doctor told the station.

19 Action News also revealed that another inmate at the same facility also killed themselves last year. That prisoner was also under special watch, like Ariel Castro.

Ariel Castro was being housed alone in an isolation unit for his protection, where he would be checked every 30 minutes.  Prison officials said he hanged himself with a sheet during a break between inspections.

Initially, Ariel Castro was being checked on every ten minutes, but this stopped in June after he was deemed not to be a risk to himself and taken off suicide watch. An autopsy confirmed his death was suicide by hanging.

Ariel Castro’s attorneys tried unsuccessfully to have an independent psychological examination of the 53-year-old done at the Cuyahoga County Jail before he was turned over to state authorities following his conviction.

A full investigation is underway as to how he was able to take his own life while under the watchful eye of prison guards – who said he was always calm and cooperative with them.

Ariel Castro used a sheet to hang himself, it emerged yesterday. No one has come to claim his body yet, according to WEWS. 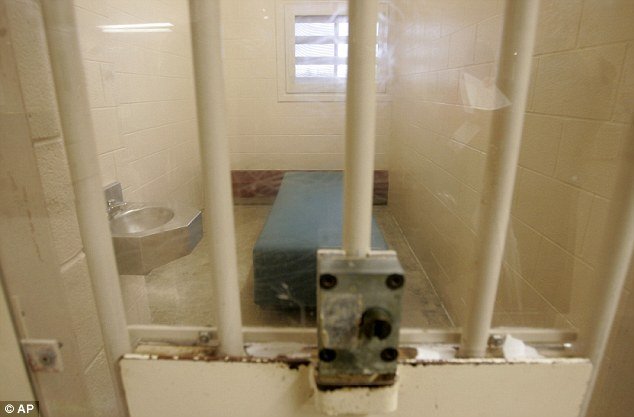 Ariel Castro was found hanging in his tiny cell on Tuesday

While his defense attorneys said they are suspicious as to why their client would have committed suicide just one month into his prison term, Cuyahoga County Prosecutor Timothy J. McGinty issued a scathing statement.

“These degenerate molesters are cowards. They con and capture vulnerable children,” he said.

“This man couldn’t take, for even a month, a small portion of what he had dished out for more than a decade.

“Let this be a message to other child kidnappers: There will be a heavy price to pay when you are caught. You won’t enjoy the captive side of the bars.”

Ariel Castro was jailed after keeping Amanda Berry, Gina DeJesus and Michelle Knight captive in unimaginable conditions in his house for ten years.

When prison guards found Ariel Castro hanging in his 8×12 foot cell on Tuesday, they immediately began trying to resuscitate him.

He was taken to Ohio State University Medical Center, where he was pronounced dead about an hour and a half later – shortly before 11 p.m.

It costs nearly $25,000 a year on average to house a prison inmate in Ohio. The cost to house Castro, who was kept in high security, would likely have been much higher.

Ariel Castro’s family – a son and three daughters by his ex-wife – were informed of his suicide about 1a.m.

A spokeswoman for the Ohio Department of Corrections said the agency will make a full investigation of Ariel Castro’s suicide to determine whether regulations were followed and if anything could have been done to prevent his death.

“I was stunned,” he told WKYC.

“I think it’s so unusual for a prisoner who is in the system for only 30 days to be found dead in a cell. If he was suicidal, he should have been under stricter protection.”

Some will see his death as “a happy ending to this story, and a quick ending and justifiable”, Craig Weintraub said.

“But we’re in a civilized society and no one should really be celebrating this.”