US diplomats are reportedly having secret talks with their Russian counterparts behind the scenes at the G-20 summit in St. Petersburg in hopes of avoiding a stalemate over Syria.

Moscow publicly warned that a military strike on Syria could have catastrophic effects if a missile hit a small reactor near Damascus that contains radioactive uranium.

The talks started last week and are continuing both in Russia and New York, said the source, who spoke on condition of anonymity because he is not authorized to speak publicly about bilateral diplomatic talks.

Russia is insisting that Barack Obama call off a planned military strike against Syria if either house of Congress declines to authorize it.

Meanwhile, US diplomats are insisting that the Russians bend in the opposite direction. They want Vladimir Putin’s government to entertain seriously a proposal from Saudi Arabia, which would require them to refrain from opposing UN Security Council resolutions pertaining to Syria and wind down its arms sales to Bashar al-Assad’s regime. 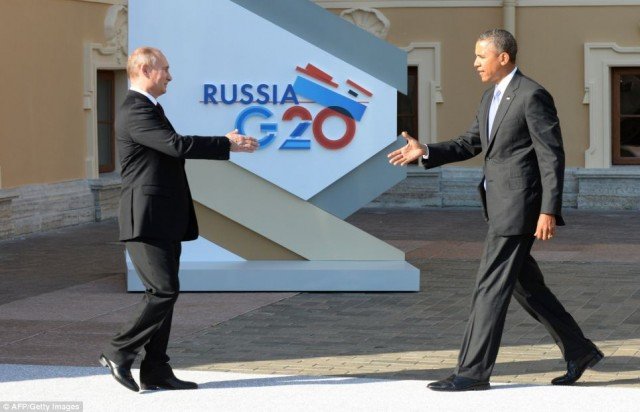 Russia urged the UN International Atomic Energy Agency (IAEA) secretariat to “react swiftly” and present IAEA members “an analysis of the risks linked to possible American strikes on the MNSR and other facilities in Syria”.

Moscow has been the most powerful ally of Syrian President Bashar al-Assad, shielding him from tougher UN resolutions and warning that a Western military attack on Syria would raise tensions and undermine efforts to end the country’s civil war.

“The IAEA is aware of the statement but has not received a formal request from the Russian Federation,” an IAEA spokesperson said.

“We will consider the questions raised if we receive such a request.”

The IAEA said in a report to member states last week that Syria had declared there was a “small amount of nuclear material” at the MNSR, a type of research reactor usually fuelled by highly enriched uranium.