While you might expect Duck Dynasty reality show about a Louisiana family of self-avowed “rednecks” to be an unfriendly environment for women, it is quite the opposite.

The women of Duck Dynasty are respected, and they are strong.

Miss Kay Robertson, the matriarch of the family, has been married to her husband Phil for nearly 50 years and has four sons. Although she is sometimes portrayed as silly or out-of-touch, she is a woman of dignity and substance.

Viewers learn that Phil and Kay Robertson endured difficulties during their decades of marriage, including Phil’s struggle with alcohol abuse and eventual return to sobriety. Now, Phil Robertson is a man of God, and Miss Kay is the apple of his eye. In spite of Phil Robertson’s occasionally obtuse generalizations about women – comparing them to labrador retrievers or declaring that all women like romantic tearjerkers – he reveres Miss Kay. He constantly praises her character, her gentleness, and her mothering, and he also affirms the loveliness of her full figure. If Phil Robertson’s adoration is any indication of Miss Kay’s integrity, then she is a fine woman indeed. 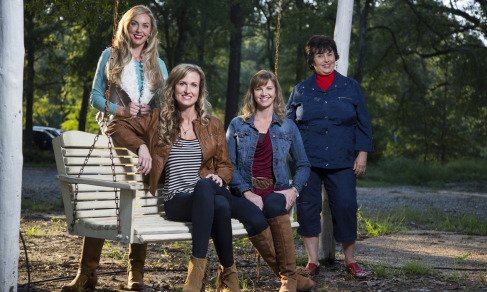 Korie is married to Willie Robertson, the CEO of Duck Commander. They married just after high school and have five children. She works as the office manager of the family business, and she’s a get-things-done kind of woman. Viewers witness her leadership over church and family events and catch glimpses of her important role in the company. Korie Robertson seems to have a natural instinct for business and marketing.

Korie and Willie Robertson’s daughter, Sadie, also has a prominent role on the show. Sadie navigates adolescent milestones such as learning to drive or attending a school dance, all with the “help” of a protective father and quirky family members. It’s also clear that Sadie Robertson has inherited her parents’ entrepreneurial spirit and passion for ministry, as she has recently debuted a weekly video devotional and hopes to produce a modest clothing line.

Missy is married to Jase Robertson, another one of Phil and Kay’s sons. Missy is very involved in the family and seems to have a playful relationship with her husband. Although the show portrays her as being somewhat high-strung, Missy Robertson seems to be a hard worker, a diligent wife and mother, and a woman of faith.

Jessica is married to Jep Robertson, Phil and Kay’s youngest son, and they have four children together. Jessica Robertson rarely appeared in the first season but she emerged as a more frequent character in the second and third. She seems to have a sweet disposition and is a friend to her fellow Robertson sisters-in-law.

Although Duck Dynasty sometimes defaults to gender stereotypes – i.e. the “citified” daughters-in-law who hate to hunt, or the slacker husbands who want to squander the day fishing and not showering – the characters are both loving and deep.

The women of Duck Dynasty are not wallflowers, subservient doormats, or flat types. Each woman on the show has contours, has a voice, and serves as an important partner to her husband.

Furthermore, the show pushes back against shallow stereotypes of Christian womanhood. The Robertson women are not cookie cutter look-alikes. They’re not all stay-at-home moms, or incredible cooks, or silent submissives.

Korie Robertson is a businesswoman without a knack for cooking or sewing, and Miss Kay wields a gentle yet authoritative power in the family. As the two main female characters, Korie and Miss Kay Robertson are not cut from the same cloth, but each woman has her own strengths, her own areas of influence, and her own expressions of self.