Scarlett Johansson got engaged to Romain Dauriac after accepting his proposal in August, People magazine reported.

“I can confirm that Scarlett and Romain are engaged. They haven’t chosen a date for the wedding,” a representative for Scarlett Johansson told Harper’s Bazaar UK.

Promoting her new film, Under The Skin, at the 70th Annual Venice International Film Festival on Tuesday, Scarlett Johansson, 28, had an undeniable glow.

Earlier in the day she had attended a photo call wearing a Sonia Rykiel knitted top and black trousers.

Scarlett Johansson proudly displayed the vintage Art Deco ring her French beau is said to have presented her with.

Her engagement ring features one large diamond as the centerpiece and then two slightly smaller ones on each side.

The three rocks are then surrounded by many other smaller stones. 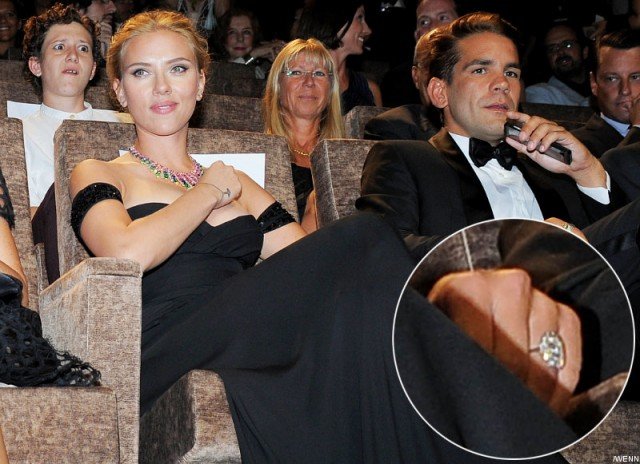 The ring appears to be set in either a white gold or platinum setting and band.

Following news of the exciting development, Scarlett Johansson and her new fiancé Romain Dauriac made a rather sheepish exit from the Italian city on Wednesday.

Scarlett Johansson and Romain Dauriac began dating in November 2012 after being introduced by mutual friends, just weeks after the actress split from her boyfriend of one year Nate Taylor.

Rumors first began to swirl that Scarlett Johansson and Romain Dauriac were planning to wed after the beauty was spotted wearing a huge pear-cut diamond ring as she wandered around New York with Romain in February.

Then in July, Scarlett Johansson was spotted wearing an ornate gold ruby ring – though friends dismissed reports she was engaged at the time, saying it was “simply a piece of jewellery”.

Scarlett Johansson admitted last year that she liked being married but hinted that she wasn’t interested in tying the knot again for quite a while.