A Washington Post photographer snapped an over-the-shoulder picture of John McCain casually betting play money on his electronic cards, while Syria’s fate was the subject of passionate statements and often carefully manicured rhetoric.

Minutes after the Post published the photo online, John McCain cracked a joke in the hope of limiting what is bound to be an embarrassing news cycle. 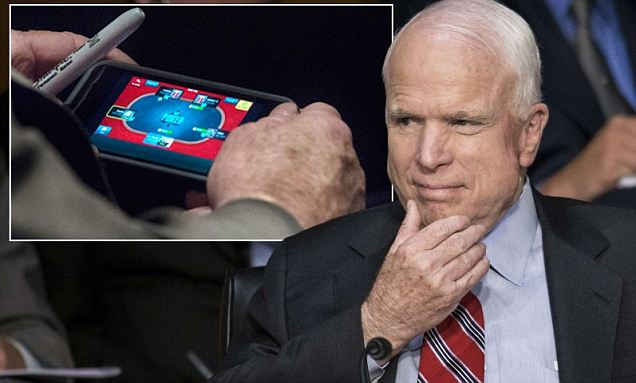 A Washington Post photographer snapped an over-the-shoulder picture of John McCain casually betting play money on his electronic cards, while Syria’s fate was the subject of passionate statements and often carefully manicured rhetoric

“Caught playing iPhone game at 3+ hour Senate hearing – worst of all I lost!”

As the news broke, John McCain was waiting to appear on CNN to discuss the Senate Foreign Relations Committee hearing.

“Occasionally I get a little bored and so I resorted,” he admitted on the air.

John McCain may have been distracted by the presentations from Secretary of State John Kerry, Secretary of Defense Chuck Hagel and Joint Chiefs Chairman Gen. Martin Dempsey. He had, after all, already made up his mind to side with the president and his request for authorization to bomb Syria.

“If the Congress were to reject a resolution like this, after the president of the United States has already committed to action, the consequences would be catastrophic,” John  McCain said after her emerged from a closed-door meeting with Barack Obama on Tuesday morning, “in that the credibility of this country with friends and adversaries alike would be shredded”.

“And there would be not only implications for this president, but for future presidencies as well.”