More than 2 million Syrians refugees have left the country until now, the UN says.

At least 700,000 have fled to Lebanon, and more Syrians are now displaced than any other nationality, the UNHCR says.

France and the US are continuing to push for military action over alleged chemical weapons use by Syrian forces.

There are suggestions that President Barack Obama may be planning much wider action than the limited strikes that have been publicly proposed.

The reports emerged as senior US politicians were set to speak before a congressional committee, to rally support for intervention.

The UNHCR said in a statement on Tuesday: “Syria is haemorrhaging women, children and men who cross borders often with little more than the clothes on their backs.”

Around half of those forced to leave are children, UN agencies estimate, with about three-quarters of them under 11. 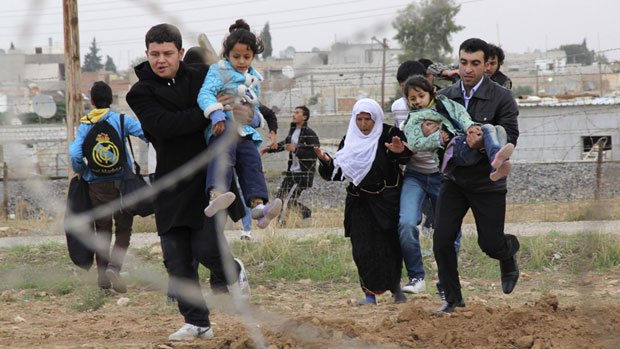 Just 118,000 refugee children have been able to continue in some sort of education, and only one-fifth have received some sort of counselling, with agencies warning of a “lost generation” of child refugees ill-equipped to help rebuild Syria in the future.

Lebanon has received the highest number of refugees, even though it is the smallest of Syria’s neighbors and one of the least able to cope.

There is now thought to be one Syrian refugee in Lebanon to roughly every six Lebanese. Jordan and Turkey have taken in the second and third highest numbers respectively.

As well as those who have left the country, a further 4.25 million have been displaced within Syria, the UNHCR says, meaning that more Syrians are now forcibly displaced than is the case with any other country.

Pointing out that more than 97% of Syria’s refugees are being hosted by countries in the surrounding region, the UNHCR said the influx was “placing an overwhelming burden on their infrastructures, economies and societies”.

It once again appealed for “massive international support” to help neighboring countries deal with the crisis.

International aid agencies are also struggling to cope with the crisis, having only 47% of funds required to meet “basic refugee needs”, the UNHCR says.

“It took two years to reach the first million refugees. It took six months for the second million to be reached,” said the UN High Commissioner for Refugees, Antonio Guterres.

He said officials could envisage three million refugees by the end of 2013.

One of the biggest single waves of refugees occurred in mid-August, when thousands from north-eastern Syria poured over the border into Iraqi Kurdistan.

Iraq has the fourth largest population of Syrian refugees, with over 170,000.

The UN says the conflict in Syria has caused the world’s worst refugee crisis for 20 years, with numbers not seen since the 1994 genocide in Rwanda.

More than 100,000 people are thought to have died since the uprising against Syrian President Bashar al-Assad began in March 2011.