Honey Boo Boo received not one but three cakes to celebrate her eighth birthday over this past weekend.

However, it seems that Honey Boo Boo didn’t even get to enjoy them, for most of the pink dessert ended up on her parent’s faces.

A food fight between Mama June and Sugar Bear broke out after Alana Thompson blew out the candles of her cake.

Over the Labor Day weekend the reality TV family travelled to Panama Beach in Florida.

While on vacation, June Shannon decided to throw a birthday celebration for her daughter at their 400-room Holiday Inn hotel.

Mama June invited all the guests staying at the hotel to join the family down at the pool for swimming, cake and a photo opportunity with the clan.

A flyer was placed on every room, reading: “You are invited to come down to the pool from 6-8pm to celebrate Alana (Honey Boo Boo)’s 8th birthday!

“Come down and hang out with the family and have some cake and go swimming! Hope to see you there!!!! Alana.”

The hotel was sold out over the weekend due to the American holiday so guests were excited to find out that Honey Boo Boo’s family was staying in the resort.

Mama June took to the microphone and had everyone line up for a photo with the family. 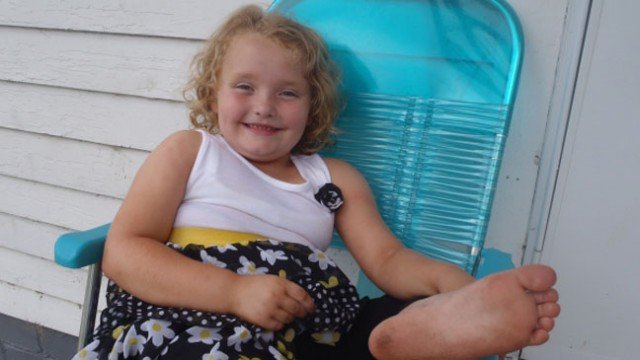 After an hour of happy snaps, everyone got together and sung happy birthday to Honey Boo Boo.

June Shannon had two huge Hello Kitty cakes to cut up and hand out to the hotel fans.

But at the end of the night a cake fight had broken out between a family friend and Mama June.

Sugar Bear also jumped in on the fun and his brother Uncle Poodle joined too with all four covered in the sugary treat.

During their vacation, the family also spent time at the hotel pool and beach where Honey Boo Boo had a blast on a lobster float and a shark boogie board.

At one point in the day, Honey Boo Boo and Lauryn had pushed their bodyguard into the pool for some fun.

And no trip to Panama Beach would be complete without a trip to Miracle Strip Pier.

The family headed straight to the amusement park where they went on several rides and had their faces painted.

At one point Sugar Bear and Mama June even shared a tender kiss.

The couple recently tied the knot during a ceremony in May at their home in Georgia.

After hitting it off they got together and their daughter, Alana “Honey Boo Boo” Thompson was born two years later.

Honey Boo Boo shot to fame on the fly-on-the-wall pageant show Toddlers & Tiaras in 2009, which saw her score her own spin-off series last year. Her three stepsisters and parents also star.

Sugar Bear, 41, proposed to Mama June twice previously but got a ‘no’ both times.

However, when he popped the question this year June Shannon decided to accept the offer.