After the release of Applause, the first single from her upcoming album Artpop, Lady Gaga gave fans a sneak peek of new track Swine.

In a new video tweeted by Lady Gaga, she offered a sneak preview of snippets of brand-new track Swine.

Lady Gaga shows off her multi-tasking ability in the clip as she sings, plays the piano and slams on some electronic drums.

And the energy climbs as Lady Gaga hits the next ham-fisted line – “Squealer, squealer, squeal OUT! / You’re so disgusting / You’re just a pig inside… SWINE!”

The song soon transitions into a hard rock breakdown reminiscent of a Trent Reznor B-side, and Lady Gaga looks possessed as she smashes a cymbal to the beat. 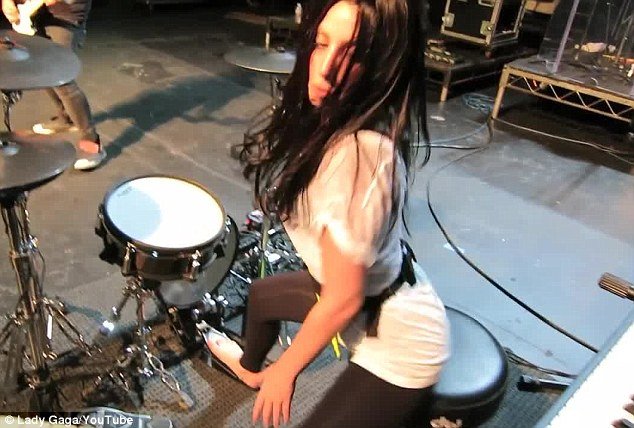 In any case, Lady Gaga seems thoroughly proud of her song, even dubbing her performance SwineFest and giving her fans a cheeky dress code.

“I will be providing a list of acceptable attire for #SwineFest throughout the week,” Lady Gaga tweeted on Wednesday.

That list apparently includes seashells, seahorses, starfish and “Botticelli-Punk accessories”, which would optimally be secured on “paint colored dreadlocks”.

She seems to love referencing the Early Renaissance painter Botticelli, even tweeting an image of his seminal painting The Birth Of Venus.

Which is fine, except the image comes with a cringe-worthy tweet: “#SomeOfUsJustLikeToRead Botticelli Punk, Seashell Girl ArtFunk!”

Lady Gaga’s new obsession apparently focuses on all things sea-related, and she even posted an animated GIF of Ariel from Disney’s The Little Mermaid.

But other suggested fashion pieces for her upcoming show strayed from the nautical theme.

Lady Gaga will perform a headlining gig on Sunday at the iTunes Festival, a month-long music fest held in London, England.

ARTCLOTHES, Lady Gaga clarified in another tweet, are “clothes you don’t mind getting covered in live art!”.