New reports claim that Amanda Knox will not return to Italy for a retrial in the murder of her roommate Meredith Kercher.

Meanwhile, David Marriott, a spokesman for the Knox family, told CNN that Amanda Knox, 26, had never agreed to attend the re-trial and that there is “no requirement she be there”.

However, Amanda Knox could still be forced to return to Italy if the country requires her extradition from the United States, the network reported.

In an interview in May, Amanda Knox expressed her fear and uncertainty about returning to the country where she was held in prison for several years for the murder of her roommate, 21-year-old Meredith Kercher.

“I’m afraid to go back there,” she told CNN.

Amanda Knox was convicted of the November 2007 murder of the British exchange student, whose body was found in the villa they shared in Perugia, in central Italy.

Her then-boyfriend, Raffaele Sollecito, was also found guilty of the killing. He received 25 years behind bars, while she was given 26 years. 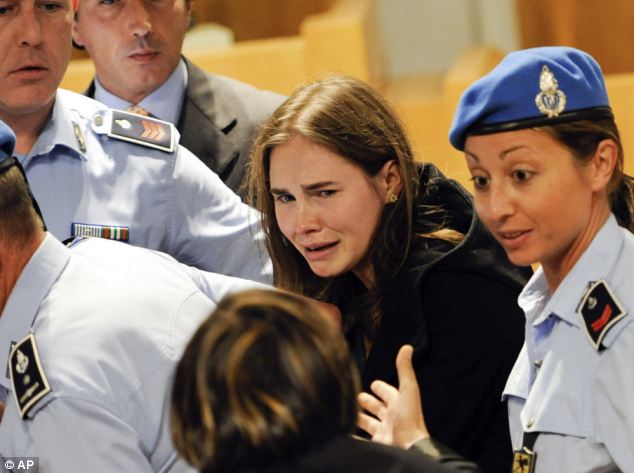 But the convictions were turned over in 2011 due to “lack of evidence”. The appellate court noted that the murder weapon was never found, said that DNA tests were faulty and that prosecutors provided no murder motive.

Their convictions had come despite a drifter from the Ivory Coast, Rudy Guede, being found guilty of the assault and murder. He is currently serving a 30-year sentence.

After she was acquitted, Amanda Knox returned home to Seattle, Washington, where she remains.

But last year, Italy’s Supreme Court said the ruling was full of “deficiencies, contradictions and illogical” conclusions and ordered the new appeals court to look at all the evidence.

The new court must conduct a full examination of evidence to resolve the ambiguities, the high court judges said.

They said the new appeal process would serve to “not only demonstrate the presence of the two suspects in the place of the crime, but to possibly outline the subjective position of Guede’s accomplices”.

It said hypotheses ran from a simple case of forced intimate relationship involving Meredith Kercher “to a group e**tic game that blew up and got out of control”.

Amanda Knox has said that such claims were “a bombardment of falsehood and fantasy”.

No date for the new trial has been set. Florence’s appeals court was chosen since Perugia only has one appellate court.

Amanda Knox and Raffaele Sollecito have both denied wrongdoing and said they weren’t even in the apartment that night, although they acknowledged they had smoked marijuana and their memories were clouded.

Earlier this year, Amanda Knox said the future was very unsure for her financially and that she is almost broke because of her huge legal bills – despite a $1.5 million book advance.

She will be paid a reported $ 4million in total for her memoir Waiting To Be Heard but claimed that her retrial and a potential libel lawsuits will leave her penniless.

Amanda Knox also revealed that to make money in the future she will be writing more books and will be taking a creative writing course at the University of Washington, near her home in Seattle.