The mysterious priest who anointed a car crash victim and then vanished before rescue workers could thank him has been identified as Reverend Patrick Dowling who works with the Diocese of Jefferson County, Missouri.

Patrick Dowling revealed he was the religious figure who appeared at the side of Katie Lentz, 19, after she was injured in a head-on collision on August 4, in a comment under a story on a Catholic news website on Friday evening, but his confession went largely unnoticed until Monday.

The incredible story went viral as some assumed the mystery priest was an angel or deceased Catholic saint Padre Pio, had persuasive powers of conversion and could heal the sick.

But Patrick Dowling, under the article on the National Catholic Register site, explained he was in fact responsible for the apparent divine intervention.

He said he had been filling in for a sick priest at Mass and was on his way home when he came upon the crash scene.

Authorities had closed off the area and were re-routing traffic but Dowling waited until he could get closer.

“I parked behind a large vehicle about 150 yards from the scene. I asked the Sheriff’s permission and approached the scene of the accident,” Patrick Dowling said.

“I absolved and anointed Katie, and, at her request, prayed that her leg would not hurt. Then I stepped aside to where some rescue personnel and the pilot were waiting, and prayed the rosary silently.”

He said he left the wreckage just as the helicopter was about to leave to take Katie Lentz to hospital.

Interestingly, he said he told someone on the scene his name but it must not have been passed on.

He then thanked the hard work of the first responders. 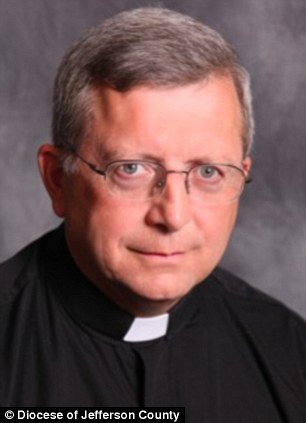 “God has blessed your work. I hope the credit goes where it is due,” Patrick Dowling explained.

In a statement to The Blaze, a spokesman for the diocese, Deacon Dan Joyce, confirmed Patrick Dowling was indeed the faith healer responsible.

“Fr. Dowling said that he is pleased that he was able to help by performing his ministry and noted that that he was just one of many who responded to assist the victim at the accident,” the statement reads.

“He and the Diocese wish to acknowledge and thank the first responders, medical team and law enforcement personnel for their efforts that morning in aid of the young woman injured in the accident.”

Fr. Patrick Dowling, a native of Kilkenny, Ireland, was ordained a priest of the Diocese of Jefferson City in 1982 and has served at parishes in Moberly, Monroe City, Indian Creek, Milan, Unionville and Eldon, Missouri, and in the diocese’s mission parishes in Marcona and Nasca, Peru.

He is currently serving in prison ministry and in parish ministry to Spanish-speaking Catholics.

Emergency workers had been battling for an hour and a half to free Katie Lentz after the head on collision, but to no avail.

But as they joined hands the priest appeared, even though there were no bystanders and the road was blocked, who offered a prayer and an instruction to the rescuers that they would now be able to free her.

Suddenly, heavy equipment needed to cut through the metal arrived from a nearby town and Katie Lentz was pulled from the wreck in time to be saved – but when they turned to thank Patrick Dowling, he was gone.

“He came up and approached the patient, and offered a prayer,” Chief Raymond Reed said of the then-mystery priest to KHQA-TV.
“It was a Catholic priest who had anointing oil with him. A sense of calmness came over her, and it did us as well.

“I can’t be for certain how it was said, but myself and another firefighter, we very plainly heard that we should remain calm, that our tools would now work and that we would get her out of that vehicle.”

That is when officers from the neighboring Hannibal Fire Department arrived with their jaws-of-life and Katie Lentz was pulled to safety and put into an air ambulance to hospital.

Turning to thank the guardian angel who had arrived from nowhere at their lowest ebb, the emergency crews could not find him.

The highway had been blocked for a quarter of a mile each end during the hour and a half rescue and no bystanders and parked cars were anywhere near the crash site on Highway 19 near Center.

“We would like to find this gentleman and be able to thank him,” Raymond Reed said before Patrick Dowling identified himself.

“As a first responder, you don’t know what you’re going to run into. We have a lot of tools, and we have intensive training. In this particular case, it is my feeling that it was nothing more than sheer faith and nothing short of a miracle.”

Katie Lentz suffered several broken bones to repair her legs, but her friends and family say that her spirit has been boosted by the somewhat divine intervention.

“Both of her legs are very damaged,” Katie Lentz’s friend Amanda Wiseman said.

“Her wrist is broken, several broken ribs, so she’s had a lot of broken bones to deal with.”

“It was a very well-built car, and when you compact materials like that one, they become even stronger because you’re cutting through multiple things instead of one layer,” Raymond Reed said.

Raymond Reed says Katie Lentz was pinned in between the steering wheel and the seat and the prayer was offered just as he was told by the paramedics that Lentz was failing.

“Where did this guy come from?” Katie Lentz’s friend Travis Wiseman asked.

The driver of the other car in that accident, Aaron Smith, has been charged with a DWI, second degree assault and failure to drive on the right half of the roadway.