Michelle Knight, one of three women held in Cleveland horrors house for about a decade, has told their captor Ariel Castro will “face hell for eternity”, as he was jailed for life.

Michelle Knight, 32, wept as she delivered her victim impact statement before Ariel Castro.

Ariel Castro, a 53-year-old former school bus driver, who was imprisoned for life without parole, plus 1,000 years, told the court he was not a monster.

The court heard Ariel Castro kept his victims chained up and repeatedly raped them.

The captives, Michelle Knight, 32, Amanda Berry, 27, and Gina DeJesus, 23, were rescued in May after one of them escaped from the Cleveland home.

Passing sentence on Thursday, Judge Michael Russo told Ariel Castro there was no place in the world for people who enslave others.

In her statement, Michelle Knight told how their captor went to church every Sunday, before coming home to “torture” the women.

“I spent 11 years in hell. Now your hell is just beginning,” she said.

“You will face hell for eternity.

“From this moment on, I will not let you define me, or affect who I am. I will live on, you will die a little every day.” 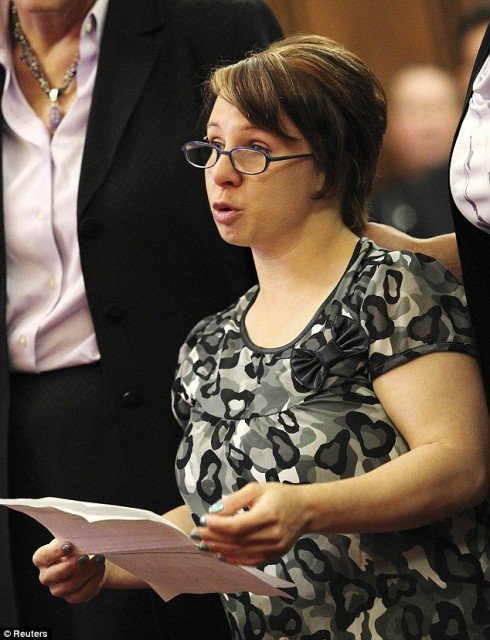 Michelle Knight was the only victim to speak at the hearing.

Ariel Castro then made a rambling statement to the court in which he blamed his s** addiction, his former wife and the FBI for not properly investigating the kidnappings.

The former bandsman continued: “To be a musician and to be a monster like you’re trying to say that I am – I don’t think I can handle that – I’m a happy person inside.”

Ariel Castro said he never planned to abduct the women, but acted on the spur of the moment when he kidnapped his first victim.

While claiming that most of the s** with his victims had been “consensual”, Castro turned to their families and to Michelle Knight to say he was “truly sorry”.

“I just hope they find it in their hearts to forgive me,” he added.

The hearing earlier heard testimony from policewoman Barbara Johnson, one of the officers who found the women.

She said that as she and another officer searched the darkened house, she shone a flashlight on herself so the women could see they were really police.

But Gina DeJesus was initially too afraid to leave her room, she added.

Prosecutors will ask the judge to ban Ariel Castro from ever seeing his daughter Jocelyn, now six years old, whom he fathered with Amanda Berry.

Other details of the women’s ordeals have already emerged.

There are plans to demolish the Cleveland house where the three were held. They were rescued after Amanda Berry kicked open a door and alerted a neighbor.