Bruce Willis was seen wearing a dressing gown as he promoted his new movie Red 2 during a recent interview.

Bruce Willis, 58, was seen wearing a green-trimmed white robe over a shirt and smart trousers as he spoke about the film with Daybreak‘s Kate Garraway during an interview in a London hotel room.

Despite Bruce Willis’ unusual choice of attire, Kate Garraway made no reference to his ensemble, instead being as professional as she could while questioning him about the action film.

It was only when the camera flashed back to Helen Fospero and John Stapleton in the Daybreak studios that they questioned his outfit.

A bemused looking John Stapleton asked: “What’s with the dressing gown? He had a shirt on underneath, and trousers.”

And Helen Fospero added: “I think he’s quite eccentric though, isn’t he?”

In addition to the odd choice of outfit, Bruce Willis also came across somewhat oddly during the interview with Kate Garraway. 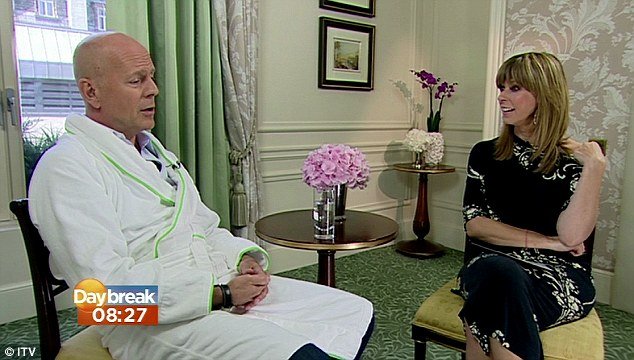 With lengthy pauses between his answers and an apparent boredom about him, fans were quick to take to Twitter after the interview to comment on his behavior, as well as his gown.

Another added: “What is Bruce Willis doing in his pyjamas on @Daybreak interview? #hesabitnuts.”

And a third Daybreak viewer tweeted: “Bruce Willis is being interviewed on @Daybreak fully clothes but has a dressing gown on top of this clothes #oddd.”

The bizarre Daybreak feature is the latest in a string of bizarre interview from Bruce Willis.

Bruce Willis first caused a commotion on Twitter with an incredibly awkward to watch interview on The One Show back in February.

He was blasted by viewers of the BBC One programme after he appeared to snub questions from hosts Matt Baker and Alex Jones while promoting his new movie A Good Day To Die Hard.

Bruce Willis gave short answers and repeatedly shrugged his shoulders in the promotional appearance described as “torture” by viewers.

The actor later apologized for being “boring” during the interview, blaming jet lag for his subdued appearance.

And earlier this month, Bruce Willis was seen in an excruciatingly cringe-making interview with Magic 105.4’s Jamie Edwards.

When Jamie Edwards asked Bruce Willis in which location he preferred shooting the film, the Die Hard star replied “Istanbul”, despite the fact that the film wasn’t even shot there.

Bruce Willis then added: “Has any actor ever told you this Jamie? This part is not acting. The fun part is over. We’re just selling the film now. Sales.”