Syrian army has fully captured Khalidiya district that was a key rebel stronghold in the central city of Homs, state media report.

The Sana news agency said the military had “restored security and stability to the neighborhood of Khalidiya”.

Activists reported clashes in Khalidiya on Monday morning, but said that most of the area was under army control.

The announcement comes a month after troops launched an offensive to oust rebels from Syria’s third largest city.

Homs has been one of the focuses of a two-year nationwide uprising against President Bashar al-Assad, in which the UN says more than 100,000 people have died.

Correspondents say the capture of Khalidiya would add further impetus to the counter-offensive by government troops and their allies, which saw the nearby town of Qusair fall in June.

On Monday, an unnamed army officer told Syrian state television: “Today, we can report having complete control of the area of Khalidiya.” 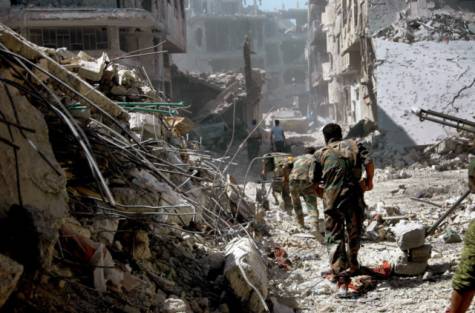 Syrian army has fully captured Khalidiya district that was a key rebel stronghold in the central city of Homs,

“That was a victory of all our fighters and the whole Syrian Army and especially our dear leader, Bashar al-Assad. And God willing, we will get rid of the terrorists in the entire country and the future will be free of killings and under the control of the army.”

However, UK-based activist group the Syrian Observatory for Human Rights cast doubt on the claim.

While the group acknowledged that government forces were in control of most of Khalidiya, it said fighting was continuing on Monday.

“Clashes took place between rebels and regime forces, supported by Hezbollah and National Defence Forces, in the southern parts of the Khalidiya neighborhood,” it said.

Opposition activists told the AFP news agency that about 90% of Khalidiya was now controlled by the army. One told the Associated Press that the battle for the district was “almost over”.

On Sunday, the Arabic TV station al-Mayadeen, which is seen as close to the Syrian government, broadcast what it said was footage of Khalidiya, showing heavily damaged buildings and piles of rubble.

It also showed pictures of the interior of the historic Khaled bin Walid mosque, a focal point for anti-government protesters. Troops reportedly seized it on Saturday, days after activists accused them of firing shells at the tomb of Khaled bin Walid, a revered figure in Islam.

Only the Old City of Homs and a few other districts are still held by the opposition. On Monday, government jets bombed the Bab Hud district of the Old City, just south of Khalidiya, according to the Syrian Observatory.