Lewis Hamilton has won back the Hungarian Grand Prix title on Sunday.

Lewis Hamilton, 28, dedicated the trophy to his ex-girlfriend Nicole Scherzinger, as he continues to show signs that he wants her back.

During a Sky Sports interview, Lewis Hamilton made his emotional tribute: “I feel like, the thought on my mind through the entire race was of someone really special to me. And I want to dedicate it to her.”

Asked by the interviewer if that person was Nicole Scherzinger, 34, he smiled and confirmed her question.

Lewis Hamilton then opened up about how trying it has been since they announced their split at the beginning of July. 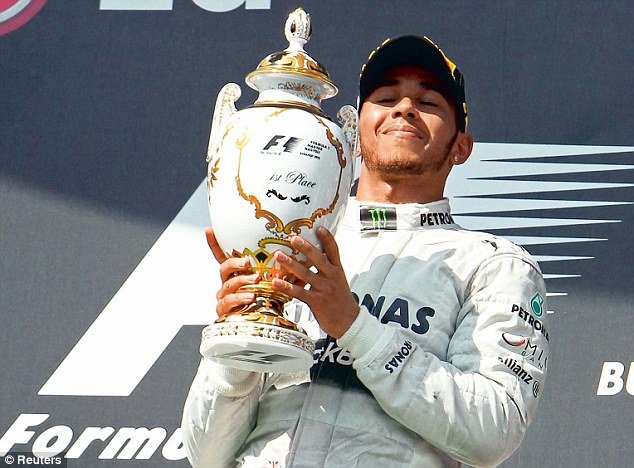 “It’s been the toughest couple of months in my life,” Lewis Hamilton confessed.

“So coming in to the race they [his parents] really wanted to lift my spirits keep my focus on and clearly it’s not affecting my driving.

“But it just doesn’t feel the same. A couple of years ago we were here together and I won, so I have great memories.”

However, Lewis Hamilton has had his parents rallying round to keep his spirits up, and help get him race ready for new team Mercedes.

“I’ve been on the phone to my mum this weekend who’s been incredibly supportive,” Lewis Hamilton said following his win.

“My dad’s been calling me, I’ve been talking to my dad a lot the last week and he’s been really supportive and just really trying to keep my spirits.

“And to come here after a real downer for the last few weeks, I really wasn’t expecting [the win].”

This isn’t the first attempt to public reach out to Nicole Scherzinger by Lewis Hamilton, as he wrote on Twitter last week: “If you’ve found that special someone, don’t EVER let them go no matter what!! Nothing in this world is more important.”