An armed man has stolen jewels worth about 40 million euros ($53 million) in the French Riviera resort of Cannes, officials say.

They say the hold-up took place on Sunday morning at a jewellery exhibition at the Carlton Hotel.

The hotel is located on the Croisette promenade – one of the most prestigious locations in the town.

The theft is the largest in a series of high-profile robberies in Cannes, which is famous for its annual film festival. 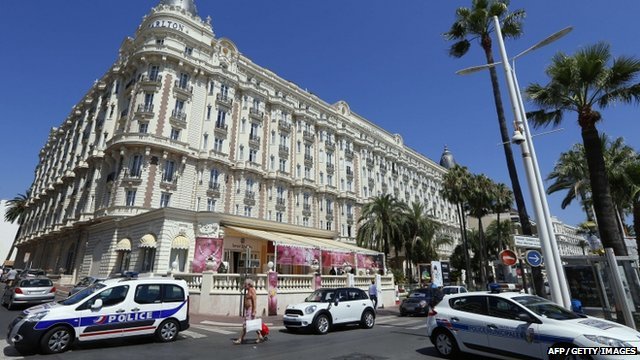 The Carlton Hotel is where Alfred Hitchcock filmed To Catch A Thief – his 1955 film about a jewel thief operating in the French Riviera.

During the latest theft, an exhibition of diamonds by the jeweller Leviev was being held in the lobby of the hotel.

Local media said the robber made off with the jewels in a briefcase. It is not yet known who the owner was.

If the value of the jewels is confirmed, it would reportedly be the second-largest heist in France.

A Cannes police spokesman said: “A full and urgent operation is under way to catch the culprit and recover these jewels. Thieves see Cannes as rich pickings.”

The Cannes film festival, which attracts celebrities from around the world, was hit by two jewellery thefts in May this year.

A necklace by Swiss jeweller De Grisogono reportedly worth 1.9 million euros ($2.5 million) vanished after a celebrity party at a five-star hotel in the resort town of Cap d’Antibes.

A week before, more than 777,000 euros ($1 million) worth of jewels were taken from the hotel room of an employee of exclusive Swiss jewellers Chopard.

The Carlton Hotel itself saw also a huge robbery in August 1994, when gunmen burst into its jewellery store just as it was closing and made off with jewels now valued at $77 million.

France’s biggest ever robbery took place in 2008, when three men stole almost every piece on display at a jewellery exhibition in Paris with an estimated value of 85 million euros ($113 million).