Polls have opened in Cambodia’s parliamentary election, with PM Hun Sen’s governing party widely expected to win the most seats.

Hun Sen’s Cambodia People’s Party (CPP) faces an opposition led by Sam Rainsy – back from self-imposed exile after a royal pardon in July.

Sam Rainsy himself is not eligible to stand, but his recent return has strengthened the opposition’s campaign.

More than nine million people are expected to cast their votes.

Hun Sen, 60, was among the early voters, casting his ballot shortly after polls opened near his home in Takmau, south of the capital Phnom Penh.

He has been Cambodia’s prime minister for nearly three decades.

Hun Sen is one of Asia’s longest-serving leaders, and has expressed the desire to stay in power for another decade. 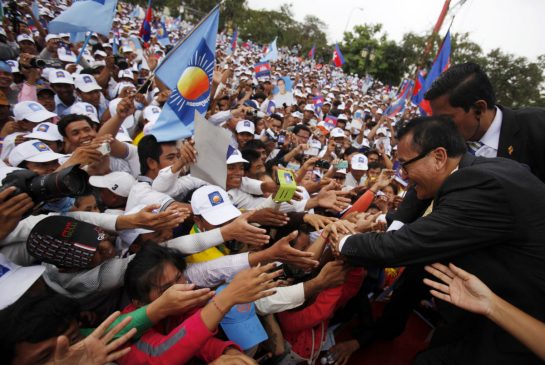 Sam Rainsy, 64, visited a polling station near his party’s office in Phnom Penh where supporters greeted him enthusiastically.

“I am happy to see people flocking to vote,” he said.

The CPP, which enjoys considerable support in the countryside, currently has 90 of the 123 seats in parliament and has been increasing its majority over the years.

This is due in part to Hun Sen being widely credited with achieving economic growth after the devastation caused by the Khmer Rouge regime in the 1970s, which was responsible for one of the worst mass killings of the 20th Century.

The opposition Cambodian National Rescue Party (CNRP) – led by Sam Rainsy – is aiming to win seats with the promise of political change.

In 2010 Sam Rainsy was sentenced in absentia to 11 years in prison, on a series of charges he says were politically motivated.

The opposition is a merger between the Sam Rainsy’s party and the Human Rights Party.

Analysts believe that younger voters may possibly help the opposition in the elections.

However, the CNRP faces an uphill battle. Most of the country’s media is controlled by the government, and human rights activists have also pointed out that the elections may not end up being free and fair.