Russian artist Petro Wodkins has created a fake ad for Armani diapers in a bid to send a message about consumerism.

Petro Wodkins, from Moscow, fooled readers and news outlets alike with his black-and-white ad, which showed a group of babies in a lavish room wearing 23 euro ($30) diapers with the Armani logo.

He told NBC News that the spoof, which bore the tagline “When only the best is good enough”, was “a statement on unbridled consumption in the formerly Communist nation” of Russia.

The advertisement was published on armanirussia.ru, a URL Petro Wodkins designed to look exactly like the Armani Russia website.

It showed a group of babies rolling around on a bearskin rug, in a room adorned with chandeliers, marble pillars and ornate furniture.

According to Hint Fashion Magazine, Petro Wodkins then sent individuals a forged e-mail from Mercedez-Benz New York Fashion Week, which discussed the possibility of selling Armani diapers in Russia.

The ad was apparently attached in the e-mail, and subsequently was sent to news websites.

“The fashion industry is pushing the boundaries for consumerism,” Petro Wodkins told the Huffington Post. 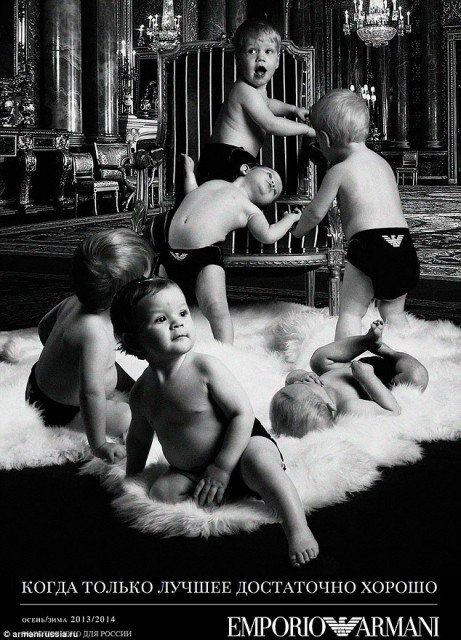 “I wanted to see what happened if I pushed the boundaries for them. To see if anyone would react.”

While the artist claimed that the hoax was directed at the fashion industry as a whole, and not at Armani in particular, the designer label has since issued a statement against the artist, noting that it plans to take legal action.

“Following reports of the business activities of the e-commerce website Armanirussia.ru the Armani Group wishes to emphasize its non-involvement in the initiative,” says the statement.

“The item for sale, especially in the baby section, are counterfeit, as are the photographs advertising them. Legal action for the immediate closure of the website. . . has been promptly initiated.”

Despite the designer’s reaction, Petro Wodkins stands by his artistic endeavor.

“I think we see things close to Armani Diapers all the time,” he said.

“People sacrifice and abandon what they deep down think is right, for a higher purpose.

“I’d say deep down everyone is feeling that a scarf for $1,000 is wrong, but the scarf serves a higher purpose – to give you what you feel you need.”

“I am open to have a coffee with them if they’d like to, instead of legal letters,” he told Hint Magazine.

“I like them. I like a lot of people not liking me back. But that’s who I am. I do my best to make people realize who they really are.”

It’s not the first time Petro Wodkins has incited controversy for his provocative pieces of art.

In May, he hid the iconic Manneken Pis statue in Belgium, Brussels, behind a golden effigy of himself.

And later that same month, he chained himself to the entrance of MUMOK museum in Austria, and sent out a fake PR e-mail stating that the museum was closed until further notice.

According to the Austrian Times, Petro Wodkins stated that his protest meant that art should “not be locked away in museums”, neither should it be about “socioeconomic positioning”.