Russian President Vladimir Putin stripped to his waist and landed a 21 kg pike during a trip to Siberia.

Vladimir Putin was joined on the trip by PM Dmitry Medvedev, in a clear bid to prove Russia’s top two remain unified despite reports of in-house tension.

Dressed in camouflage and sporting a slouch hat, Vladimir Putin manned the helm aboard a small fishing boat before taking a turn casting a line. 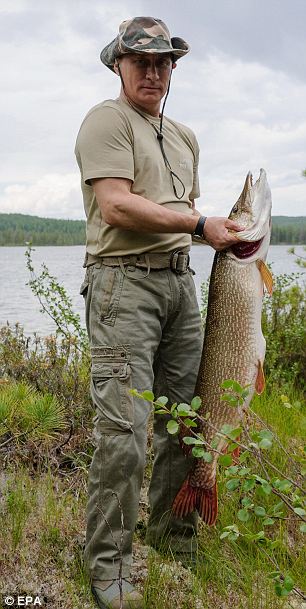 State television showed Vladimir Putin laughing in amazement as he dragged the pike onto the jetty.

He then turned to the cameras and kissed his prize on the gills.

While the cameras were still rolling, Vladimir Putin also took his top of, in his latest show of peck-flexing machismo.

Vladimir Putin has never shied away from self-publicity, particularly in bolstering his hardman reputation.

He was famously pictured in 2007 while on holiday in southern Siberia’s Tuva region swimming, hunting and fishing with no shirt on to show off his masculine physique.

Vladimir Putin is also a keen jodu player and has been photographed flying helicopters, driving formula 1 racing cars and shooting guns on a regular basis.