A recently launched website that sells “real” Tooth Fairy toys has been slammed for commercializing a character that once existed solely in children’s imaginations.

While the website markets itself as a fun and educational tool for young children, some have branded it as “sleazy” for hijacking the one fictional character who had escaped commercialization.

A shop for “earthie girls”, the term the site uses to refer to young children, features a huge variety of books, jewelry, costumes, downloadable songs and party decorations.

But while children used to think $1 to $5 under the pillow was a generous gift for losing a tooth, Real Tooth Fairy sets the monetary standard far higher. 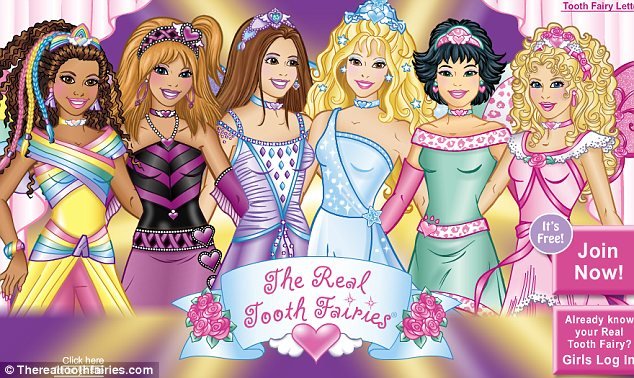 While the site is aimed at young girls aged five to ten, the cartoon representations of Tooth Fairies appear far older, with tiny waists, revealing outfits and make-up that liken them to Barbies.

In a transcript of the video posted on CommercialFreeChildhood.org, a voiceover says:  “With a target audience of 10million U.S. girls ages six to ten who lose 20 teeth, that translates to 200 million Tooth Fairy moments.”

The “cha-ching” sound of a cash register is heard in the background, before the voiceover adds: “And biology guarantees that will never stop.”

Campaign for Commercial Free Childhood, also known as CCFC, has launched an initiative to stop the toy company from “[cashing] in on one of childhood’s most treasured imaginary figures”.

CCFC director Dr. Susan Linn said in a statement: “It’s bad enough that so many commercial characters marketed to little girls are s***alized.

“It’s especially egregious to s***alize a childhood icon that has only existed in children’s imagination.”